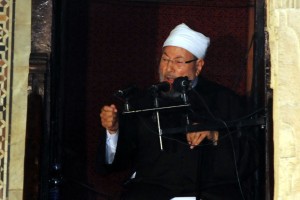 Al-Azhar Mosque was overcrowded on Friday morning with worshipers who came to attend the Friday sermon given by head of the International Association of Muslim Scholars, Yusuf al-Qaradawi.

Hundreds of worshipers, mostly young men, lined up outside the gates hoping to enter the mosque, while others decided to listen to the sermon and perform prayers on sidewalks outside.

END_OF_DOCUMENT_TOKEN_TO_BE_REPLACED

Hundreds of people marched in a peaceful rally from the Omar bin Khattab mosque to the American embassy in Doha yesterday afternoon soon after the Friday prayer to protest against a film denigrating the Prophet of Islam.

Expressing their resentment over the attempt to malign Islam by tarnishing the image of the Prophet, the protesters called for revenge against those who made the movie. “No Muslim will tolerate such a cowardly and lewd form of depicting the Prophet’s personal life. It is unfortunate that America and Europe have become the breeding ground for hatred against Islam and Islamic values and Islamic way of life” said one of the protesters, Abdullah al-Mutawwa.

Prior to the rally, Islamic scholar and chairman of the International Union of Ulema, Dr Sheikh Yousuf al-Qaradawi, strongly criticised the film in his Friday sermon at the Omar bin Khattab mosque.

END_OF_DOCUMENT_TOKEN_TO_BE_REPLACED

Renowned Islamic scholars reacted to a movie that insulted Holy Prophet Muhammad and the ensuing attacks on embassies by issuing a joint statement.

In a statement released on Friday, the An Nusra Al Alamiya organization led by Yusuf al-Qaradawi made a call for prudence. With its headquarters in Kuwait, An Nusra Al Alamiya pointed out that the movie targeting Holy Prophet Muhammad was provocative and all ensuing attacks on U.S. embassies should end.

END_OF_DOCUMENT_TOKEN_TO_BE_REPLACED

France said Thursday it had banned four Muslim preachers from entering the country to attend an Islamic conference, saying their “calls for hatred and violence seriously damage republican principles”.

France also “regrets” that Swiss intellectual Tariq Ramadan has been invited to the meeting of the Union of Islamic Organizations in France (UOIF), a statement from Foreign Minister Alain Juppe and Interior Minister Claude Gueant said.

END_OF_DOCUMENT_TOKEN_TO_BE_REPLACED 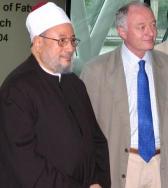 END_OF_DOCUMENT_TOKEN_TO_BE_REPLACED

The Union of French Islamic Organisations is surprised at the current controversy provoked by a statement by the National Front spreading inaccurate information about Sheikh Qaradawi when he has visited France and Europe on several occasions.

The UOIF regrets that the climate of suspicion toward the Muslim community is the source of a controversy over information that has been available for months.

Sheikh Qaradawi is a man of peace and tolerance who has worked for openness and moderation and whose positions are always in favour of justice and peoples’ freedom. He was received by Pope Jean-Paul II and for several years has carried out work on interfaith dialogue with Jewish and Christian communities around the world.

He exercises a positive influence in the Muslim world and is continually attacked by extremist movements because of his modern positions in favour of democracy, women’s rights and dialogue between civilisations.

END_OF_DOCUMENT_TOKEN_TO_BE_REPLACED

The French government will deny entry to an influential Egyptian preacher if he accepts an invitation from an Islamic organisation to visit France next month, a close aide to President Nicolas Sarkozy said on Sunday.

Sarkozy, who is running for re-election, has announced a crackdown on people who follow extremist Islamic messages on radical websites in the wake of a spate of killings by an al Qaeda-inspired gunman.

His aide, Henri Guaino said the government would take measures to block the entry of Sheikh Yousef al-Qaradawi if he seeks to take up the invitation from the Union of French Islamic Organisations (UOIF), a Muslim umbrella group.

“The French government does not want any extremist preachers entering its territory,” Guaino, a special advisor and speech writer to Sarkozy, told French Radio J.

END_OF_DOCUMENT_TOKEN_TO_BE_REPLACED

The Financial Times reports that Yusuf al-Qaradawi has been threatened with arrest in Dubai over his support for Syrian oppositionists who are facing expulsion from the United Arab Emirates because of their participation in an anti-Assad demonstration. We look forward to a post at Harry’s Place expressing their solidarity with Qaradawi.

“As Islamists emerge as the biggest political force in the Arab world, his pragmatic views on Islam and democracy could be a useful moderating guide for Arab societies.” 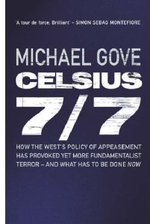 Mr Livingstone made his comments in an interview after being asked about his invitation to controversial Egyptian cleric Yusuf al-Qaradawi during his time as mayor. He said “fervent Zionists” such as Mr Gove had wanted to “isolate” Sheikh al-Qaradawi because of his criticisms of Israel.

Mr Livingstone added: “Just look at [Gove’s] writings and the general tone he takes is to depict Islam as genuinely a threat. He’s at the extreme end of this.” He told the London Loves Business website that “people like Michael Gove and others have been stridently Islamophobic for some time, and they assume there are votes in this”.