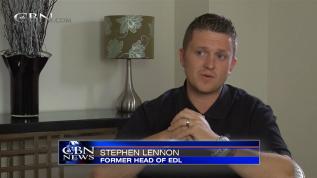 Following the publication in Dispatch International of Ingrid Carlqvist and Lars Hedegaard’s interview with Stephen Lennon, CBN News has published an adulatory report on the former English Defence League leader, based on an interview apparently conducted shortly before his departure from the organisation. In the accompanying video, Lennon is hailed by right-wing televangelist Pat Robertson as a hero who is “fighting to save Britain’s future”.

The Christian Broadcasting Network, to give it its full title, is a US-based operation founded by Robertson, who although not part of the “counterjihad” network very much shares its line on the threat from Islam. Interviews with such fringe news outlets are rather more revealing than those Lennon does with the mainstream media – because, when he’s addressing a sympathetic audience like this, he tends to be more open about his real views.

If there’s been any shift at all in Lennon’s Islamophobic rhetoric since he broke with the EDL and established his alliance with the “counter-extremism” think tank Quilliam, it’s that he is now more inclined to talk about the enemy being Islamism, rather than Islam. Speaking to CBN, however, Lennon made it clear what his real thinking is on this issue. Evidently responding to David Cameron’s statements that Islam is not to blame for the killing of Lee Rigby or the recent terrorist attack in Nairobi, Lennon angrily declared:

“Previous prime ministers, be it William Gladstone who said, ‘There will never be peace on this earth as long as we have the Koran, it’s an accursed and violent book.’ Then we have Winston Churchill who said, ‘Islam in a man is like rabies in a dog.’ And then we have David Cameron, who says Islam is a religion of peace. What’s changed? Because the book hasn’t changed.”

In the interview Lennon also indulges in the violent and inflammatory rhetoric that featured in his speeches at EDL rallies. Warning that “the British people are not going to sit back and take much more”, he predicts that a civil war is “the inevitable outcome for the way the country is going”.

The reason for this forthcoming war, according to Lennon, is that the government has failed to address the supposedly legitimate concerns of ignorant anti-Muslim bigots like himself. Instead of listening to his supporters, Lennon claims, the authorities have responded by denying them the right to free speech: “This is a land of democracy … when you’re angry, you channel that frustration through peaceful protest. You take that right away from people, and what are they going to do? They’re going to be responsible for creating a monster.”

As an illustration of the suppression of democracy that is leading inexorably to civil war, Lennon offers the anti-social behaviour orders that have been served on various EDL hooligans. He indignantly asserts that “some of our members have been given 10-year ASBOs not to protest against Islam”. Let’s have a look at the actual cases of EDL supporters who have had these orders imposed on them.

The first EDL supporter to receive an ASBO was Shane Overton, who racially abused a Muslim family on his way home from an EDL protest, causing two children to “cling to their parents in fear”. This was followed by an ASBO for former EDL youth leader Joel Titus, who had been involved in a series of violent incidents at EDL events. Then came Brian (“Clint”) Bristow, who received an ASBO for his part in an attack an Islamic literature stall following an EDL rally.

An ASBO was also imposed on John McAndrew, who took part in a violent assault on two Muslims during an EDL protest, in the course of which he kicked one of the victims and broke his jaw. Michael Kelly and an unnamed 16-year-old, who engaged in violent disorder at an EDL demonstration, received ASBOs, as did Peter Jelley and Jack Beasley, convicted of threatening behaviour at an EDL protest. And an ASBO was served on John Parkin, who tried to burn down his local mosque.

These are the individuals who, according to Lennon, have been subjected to state repression for exercising their democratic right to “protest against Islam”. In other words, he doesn’t just uphold the poisonous Islamophobic ideology of the EDL, he also defends the intimidation and thuggery through which that ideology has been expressed.

The CBN News report also gives credence to Lennon’s claim that he “battled” to keep neo-Nazis and white supremacists out of the organisation. As he explains in a clip from the Newsnight interview that followed his break with the EDL, he was “let down by the people in the organisation who were in positions” and who “invited Nazis to stand with them in the street”. According to Lennon’s version of events, this Nazi infiltration of the EDL took place while he was in prison. It’s worth taking the opportunity here to nail that particular lie.

It is true that Lennon did have a falling out early in 2012 with some elements in the EDL, mainly based in the north of England, who then broke away to form the Infidels. It is also the case that they made no secret of their neo-Nazi sympathies. But then, neither did Lennon’s PA, Hel Gower, and he never had a problem with that. Some of us suspected at the time of the split with the Infidels that Lennon’s hostility towards them had more to do with their refusal to accept instructions from a southern-based leadership than with any principled opposition on his part to their fascist politics.

This analysis was reinforced by Lennon’s failure to take any action against the North East leadership of the EDL, headed by the convicted fascist thug Alan Spence, when they organised a violent intervention against an anti-Jubilee event in Newcastle in June 2012 in co-operation with other far-right groups, including open Nazis. The EDL were photographed displaying their banner alongside that of the National Front, which prominently featured the white supremacist Fourteen Words. Unlike the Infidels, however, Spence was prepared to defer to Lennon’s leadership, so this fascist remained in place as the EDL’s regional organiser.

Furthermore, after the EDL’s September 2012 debacle in Waltham Forest, when their small forces were heavily outnumbered by counter-demonstrators, Lennon issued a public appeal for his opponents who had left the EDL to return and join him for a repeat protest in that borough. The protest didn’t take place, because the police imposed a Section 14 ban, but the results of Lennon’s call for far-right unity could be seen at the EDL’s demonstration in Shotton Colliery in December 2012, where they were joined by a contingent from the North East Infidels. Admittedly, Lennon was in prison by that point, having been remanded in custody while awaiting trial for passport fraud. But it was Lennon himself, not those leading the EDL in his absence, who had invited the Nazis back.

In the past I’ve referred to Lennon as a lying little toerag, but I’m open to persuasion that he is perhaps better understood as a sociopath who is simply incapable of distinguishing truth from self-justifying fiction.