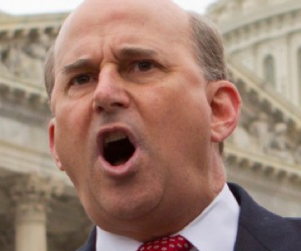 Tea Party Congressman Louie Gohmert (R-TX) told a conservative radio show on Thursday that the GOP must oppose gun regulations to protect the country from the threat of “Sharia Law.”

Appearing on The Voice of Freedom, Gohmert said he “hoped and prayed” that Congress rejects gun safety legislation, arguing that Americans may need to use the rights guaranteed by the Second Amendment to avoid succumbing to Muslims:

[The Second Amendment] is for our protection and the founders’ quotes make that very very clear and including against a government that would run amuck. We’ve got some people who think Sharia Law should be the law of the land, forget the Constitution. But the guns are there… to make sure all of the rest of the Amendments are followed.

Gohmert has a long history of Islamaphobic remarks, most recently joining Rep. Michele Bachmannn’s (R-MN) much maligned effort to investigate the alleged infiltration of the Muslim Brotherhood into various departments of the U.S. government.