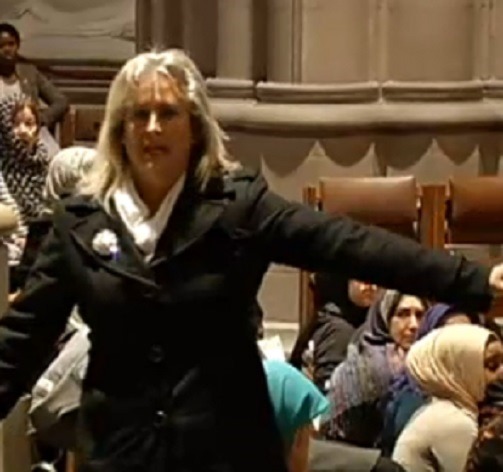 Some people are very, very unhappy about it. Among them: A Michigan woman named Christine Weick, who sneaked into the cathedral during the private service to tell the worshipers to “leave our churches alone.”

A day later, Weick spoke to the conservative news site World Net Daily, which called her “a folk hero of sorts for thousands, if not millions, of Christians.” Weick, who said she lives out of her car, told WND that she read about the prayer service on Drudge Report days before it happened.

“My blood began to boil as I read the comments of how this is to be such a wonderful event and how religious tolerance can, for the first time, be shown in our nation’s capital,” she said of the news coverage in advance of the interfaith service.

She was staying in Tennessee at the time and drove hundreds of miles to find a way into the service and, she said, to do something about it.

Although the event was closed to the public and all guests had to pass through security, Weick made it in without any trouble, she said. Once seated, she said, “it hit me … I had such an angst come over me. Seeing these Muslims sitting on their rugs ready to bow to a god, causing such an abomination in the house of the Lord.”

Despite her fears of “going to jail” following her verbal protest, Weick told WND that she was not arrested.

The Muslims praying around her were invited to the cathedral by the Christian clergy who run it. Many of the worshipers there lived and worked in the Washington area and came from local mosques for the event. Some brought their children to the prayer service.

Here is what Weick said to them: “Jesus Christ died on that cross. He is the reason we are to worship only Him. Jesus Christ is our Lord and Savior. We have built … allowed you your mosques in this country. Why don’t you worship in your mosques and leave our churches alone? We are a country founded on Christian principles.”

Weick was the most visible protester of the interfaith service, which came about with the collaboration of the National Cathedral’s director of liturgy, the Rev. Gina Campbell, and the South African ambassador to the United States, Ebrahim Rasool, who is Muslim.

But Weick was hardly the only one to come out against the service. A small but vocal group – including at least one member of Congress – was similarly furious.

Rep. Louie Gohmert (R-Tex.) took to the House floor Friday with two blown-up photographs of crucifixions behind him. Gohmert then read from a pair of articles accusing the groups participating in the prayers of using the interfaith service to secretly honor the 100th anniversary of a speech from the last Caliph of the Ottoman empire.

The speech has a connection to the Armenian genocide, which is why Gohmert had crucifixion pictures behind him. Essentially, he was accusing the church of unwittingly honoring a genocide.

“It is sheer lunacy not to recognize how important anniversaries are to radical Islamists, to the Muslim brotherhood, to those who would kill and persecute and wipe out Jews and as they say, wipe the great Satan America off the map and the little Satan Israel off the map,” Gohmert said, according to the Hill.

In the Breitbart article referenced by Gohmert, Sebastian Gorka wrote that he believed the Episcopal Church did not “understand the finer points of jihadist doctrine, one of which is that if a place of worship is used by Muslims for their prayers, that territory subsequently becomes part of Dar al Islam, sacred Muslim land.”