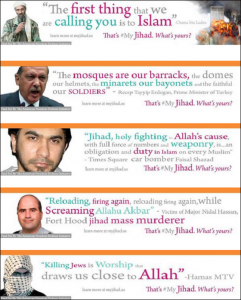 San Francisco leaders have denounced a series of what they call anti-Islamic advertisements that began appearing on 10 city buses on Monday, calling them racist and offensive.

At least one of the ads contains a quote attributed to the militant Islamic group Hamas that reads: “Killing Jews is worship that brings us closer to Allah.”

The ads are paid for by the American Freedom Defense Initiative and feature Osama bin Laden, the Times Square car bomber and the alleged gunman in the Fort Hood, Texas, shootings accompanied by quotes about warfare and weapons that the group links to Islam. The group ran similar ads in San Francisco in August and has also posted ads in New York City, including one in September that called enemies of Israel “savages.”

San Francisco’s transit agency believes a First Amendment court decision forces it to accept the advertising. It plans to give the $5,000 used to pay for the ads to the city’s Human Rights Commission to study the impact of discrimination on San Francisco’s Islamic communities and run its own ads against discrimination.

American Freedom Defense Initiative’s executive director, Pamela Geller, told The Associated Press on Tuesday the purpose of the campaign is to show the “reality of jihad and root causes of terrorism, from the words of jihadists themselves.”

“City officials denounce our ads, but not the actual quotes from high-profile jihadists calling for holy war and genocide,” she said in an email.

“Our new campaign focuses on how jihadists use the texts and teachings of Islam to justify violence and supremacism.”