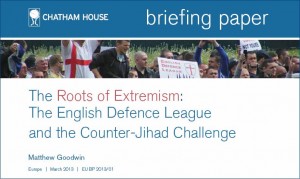 Last week Chatham House (the Royal Institute of International Affairs) launched a new study by Matthew Goodwin, a Nottingham University academic specialising in the far right, entitled The Roots of Extremism: The English Defence League and the Counter-Jihad Challenge.

Claiming to debunk the assumptions usually made about the EDL attracting disproportionate support from the economically disadvantaged and the unemployed, Goodwin’s paper produced headlines such as “Managers and skilled workers make up bulk of far right supporters” (Daily Telegraph) and “English Defence League supporters are mostly full-time workers, survey finds” (Huffington Post).

Goodwin’s is the second study to attempt an analysis of the social composition and ideology of the EDL’s support base. In November 2011 Demos published a report entitled Inside the EDL: Populist Politics in a Digital Age, the authors of which, Jamie Bartlett and Mark Littler, had the novel idea of placing advertisements on Facebook asking for EDL supporters to complete a survey.

This approach had some obvious weaknesses, not least the fact that an online poll necessarily skewed the results with regard to the income and educational qualifications of respondents, as internet access is closely linked to both (an OxIS study last year found that 45% of people earning £12,500 a year or less, and 61% of people with no educational qualifications, had never used the internet). However, the Demos approach did have the merit of providing a large pool of respondents. Altogether 1,295 supporters and sympathisers of the EDL participated in the Demos survey.

How does the Chatham House study improve on this? To be blunt, it doesn’t. Goodwin’s paper is based on an online poll by YouGov and is therefore subject to the same problems regarding internet access as the Demos survey (although YouGov claims to weight the results to take account of this). Moreover, unlike the authors of the Demos study, Goodwin has attempted to analyse the EDL’s support base through the results of a conventional opinion poll. Given that the EDL is backed by a tiny percentage of the population (attendance at EDL demonstrations these days doesn’t even reach four figures and at the time of writing its Facebook page has attracted a mere 17,205 “likes” – out of a total UK population of 63 million) it should have been obvious that the YouGov survey was going to identify very few EDL supporters.

And so it proved. YouGov polled 1,666 individuals, of whom a mere 33 stated that they agreed with the “values and methods” of the EDL. You can read YouGov’s own comparison of the attitudes of EDL sympathisers and those of non-EDL respondents here. Not unexpectedly, the figures show that EDL sympathisers are obsessed with the issue of immigration and disinclined to agree with the view that the EDL is racist. But a sample of 33 respondents (39 after weighting) is obviously an inadequate statistical basis on which to draw any firm conclusions about the nature of support for the EDL.

Goodwin, however, claims that the YouGov poll uncovered 298 people whom he characterises as “supporters” and “sympathisers” of the EDL, and he bases his analysis on this much larger sample. How did Goodwin come up with such an astonishingly high figure? The answer is that he has included those respondents who said they agreed “with the values of the English Defence League but not their methods” (emphasis added). Given the widespread hostility to Islam among the non-Muslim population of the UK (and the YouGov poll provides some revealing statistics on that), it is hardly surprising that a large number of respondents should say that they share the values of a high profile Islamophobic organisation like the EDL. But to describe people who say they disagree with the EDL’s methods as supporters and sympathisers is misleading if not downright fraudulent.

The differences between Goodwin’s findings and those in the earlier Demos study are considerable. Demos found that 28% of respondents were unemployed, compared with the national average of 6%, and that 34% voted for the British National Party. Goodwin’s study, by contrast, asserts that EDL supporters, with an unemployment rate of just 3%, “are no more likely than average to be unemployed”, while a mere 1% of them back the BNP. These sharply divergent statistics are obviously to be explained by the fact that all of the individuals polled in the Demos survey were actual supporters of the EDL, whereas the overwhelming majority of those on whom Goodwin’s analysis is based are not.

The Chatham House study is therefore largely useless as a means of understanding the support base of the EDL. It is an analysis, not of the EDL and its supporters, but of a much wider section of the public who share some of the EDL’s views while repudiating its methods. The most you could say is that it provides an insight into the social and ideological character of potential recruits to the EDL. But that is not the way the results of the Chatham House study have been presented to, and reported by, the media.

Goodwin has a good section towards the end of his paper about the wider Islamophobic culture in which so-called “counter-jihad” organisations can take root and thrive (see also his article at the Huffington Post). He points to the positive evidence that people in the 18-24 age group are much more comfortable with the multicultural society in which they have grown up and far less hostile to the Muslim community than older people are. He argues that these attitudes should be supported and encouraged, while at the same time exposing the myths and propaganda on which anti-Muslim bigotry is based. Nobody could disagree with that.

However, as Goodwin points out in the introduction to his paper, the specific challenge posed by the EDL is that it provides a focus and inspiration not just for bigots but for violent extremists. Indeed, he quotes a 2012 Europol report which emphasises that “the threat of violent right-wing extremism has reached new levels in Europe and should not be underestimated”. One important means of countering this threat is to put pressure on the authorities to recognise that the EDL is a violent racist organisation of the far right – which the police generally, and the National Domestic Extremism Unit in particular, have been very reluctant to do.

To publish a study of individuals most of whom have no connection whatsoever to the EDL, and pass it off as an analysis of EDL supporters, is not a helpful contribution to achieving this objective. On the contrary, by reinforcing the view that EDL is made up of ordinary, respectable members of society – the bulk of them “managers and skilled workers”, no less – Goodwin’s Chatham House study and the media coverage it prompted make it less likely that the authorities will take the necessary steps to control the violent, racist, lumpen thugs who comprise the EDL’s direct action wing.