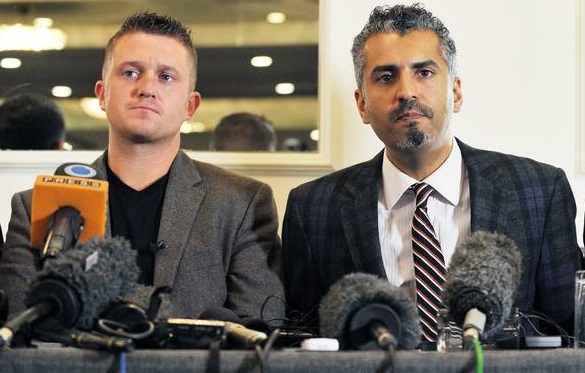 Since they announced the resignation of Stephen Lennon (“Tommy Robinson”) from the English Defence League at a heavily publicised press conference last October, Quilliam’s relationship with the former EDL leader hasn’t turned out to be quite the success they had anticipated.

Not only has Quilliam’s claim that Lennon had broken with extremism been widely recognised as baseless, but they have suffered the additional embarrassment of being publicly associated with a convicted criminal currently serving an 18-month prison sentence for mortgage fraud. Consequently, Quilliam’s initial expectation that they might win back some of their once generous state funding on the basis of facilitating Lennon’s departure from the EDL has failed to materialise. With Lennon incarcerated and out of public view for most of this year at least, Quilliam would have been well advised to move on, forget the whole sorry business and hope that everyone else did too.

However, while it would be quite understandable if Quilliam were indeed getting cold feet over their links with Lennon and backtracking from the relationship, this is clearly not the case. Showing complete disregard for the first law of holes, Quilliam have in fact been working hard to attract further publicity for their protégé, on the basis of a claim that he has been the victim of physical violence from his fellow prisoners.

According to an account on the Tommy Robinson Facebook page, Lennon “was on his way for a legal visit and the Warden put him in a room with 3-4 Muslim converts, locked the door and went off”. The Muslims proceeded to attack Lennon, inflicting black eyes, a bloody nose, and a sore neck resulting from an attempt by his assailants to “rip his head off”. A statement by a Ministry of Justice spokesperson indicating that this was a rather low-level altercation – “A prisoner has been treated for minor injuries following an incident at HMP Woodhill on Wednesday 5 February” – led to the accusation by former EDL co-leader Kevin Carroll that the attack was “being played down by the Authorities”.

Given that both Lennon and Carroll have a record of exaggerating or even inventing stories of being attacked by Muslims, in order to whip their supporters up into an Islamophobic frenzy, you would be inclined to treat the prison assault report with a degree of scepticism. Yet Quilliam’s chairman Maajid Nawaz immediately wrote a letter to justice secretary Chris Grayling complaining about the attack on Lennon and asserting that there is a real prospect of Lennon being murdered, which Nawaz warned dramatically could provoke “a nationwide sectarian and violent response from his supporters”. Quilliam’s senior researcher Usama Hasan followed this up with an appearance on BBC 5 Live in order to alert the public to poor Tommy’s plight.

In this radio interview Hasan continued to uphold Quilliam’s fraudulent story about Lennon’s supposed break with extremist ideology, assuring listeners that “Stephen had an Islamophobic past and then he renounced that when he left the EDL”. Questioned by 5 Live host Nicky Campbell as to whether Lennon’s views had really changed, Hasan replied: “we showed him very clearly that there’s a big difference between Islam and Muslim extremism, and he has been pretty consistent on that line since leaving the EDL, so yes his views have changed.”

The reality, as Quilliam’s critics have repeatedly pointed out, is that while Lennon may have broken organisationally with the EDL there is no sign that he has renounced its ideology. Indeed Lennon himself has emphasised that his views haven’t changed at all. Interviewed by the editors of the “counterjihad” publication Dispatch International a few weeks after resigning from the EDL, Lennon insisted: “What I’m saying now is the same as I’ve been saying for four and a half years.” Last month his reaction to the charge that he had denounced the EDL was to demand indignantly: “when have I slagged Edl off? Remember what I stood for? It’s what I stand for! Like I’ve forgot! I live it every day.”

As for Kevin Carroll, who not so long ago was describing Muslims as “all fukin backward savages, a devil spawned death cult worshiping all that is unholy and barbaric, pure evil”, there is even less evidence that he has renounced his former views. Here, for example, is Carroll retweeting a post by “Nationalist UK” (veteran far-right activist Michael Wood) in support of Marine Le Pen’s views on Muslim immigration into France: 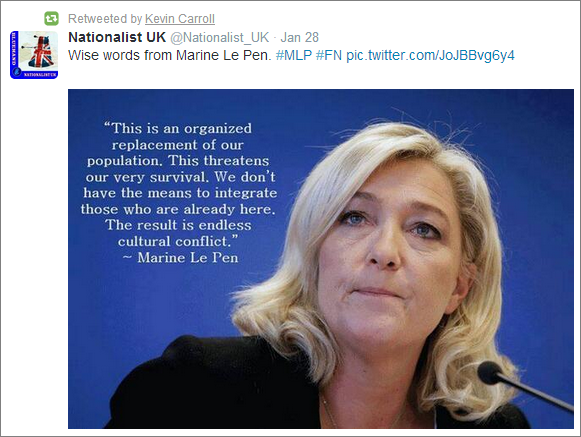 Despite this, it’s obvious that Quilliam have no intention of distancing themselves from either Lennon or Carroll. They will presumably make further efforts to maintain Lennon’s public profile while he is in prison, in order to resume co-operation with him once he is released. In the meantime they will continue to work with Carroll, closing their eyes to all the evidence that he remains an unreconstructed far-right bigot.

Quite what Quilliam hope to achieve by this is unclear. It may be, as we have suggested previously, that they have their eye on attracting funding from hardline right-wing circles in the USA. So far as Quilliam’s reputation in the UK is concerned, however, they have merely succeeded in making themselves look completely ridiculous.