EDL News draws our attention to a recent Facebook comment by Kevin Carroll, who is now leading the English Defence League during the enforced absence of his cousin Stephen Lennon, and is also standing as the British Freedom party candidate for Police and Crime Commissioner in Bedfordshire.

The official EDL line is that they are opposed to Islam as a barbaric 7th-century ideology, but have nothing against its followers. In reality, of course, the EDL is a movement of far-right racists who just hate Muslims, as the vile comments that its rank-and-file supporters post on Facebook demonstrate every day. And, as Carroll shows here, even the EDL leaders sometimes allow their mask to slip. 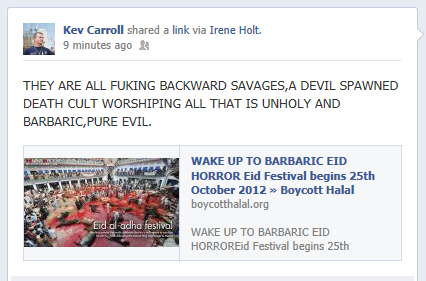