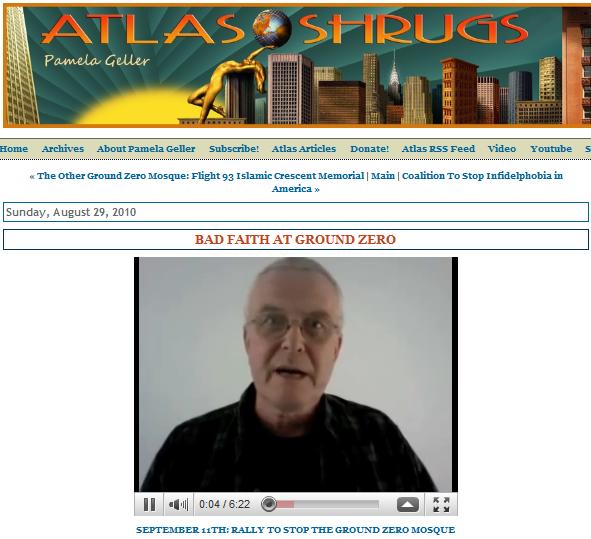 Pamela Geller is evidently to be counted among the admirers of British “comedian” Pat Condell. She has posted his latest rant against the “Ground Zero mosque” on her website Atlas Shrugs to help promote the Stop Islamization of America demonstration in New York next week at which Geert Wilders will be a featured speaker. So has Jihad Watch, the website of her fellow right-wing Islam-basher and co-leader of SIOA Robert Spencer (“Condell’s commentary is passionate, articulate, wide-ranging, and hard-hitting”). And today David Horowitz’s FrontPage Magazine follows suit (“Don’t miss Pat Condell’s new hard-hitting video on the stunt Islam is trying to pull off in America”).

If you really want to subject yourself to Condell’s ignorant bigotry you can view the video on YouTube.

Here in the UK Condell is a member of the National Secular Society, who are also great admirers of his Islamophobic rants.

Two years ago the NSS posted a piece on their website applauding the fact that Condell’s video “The Trouble with Islam” had received a hundred thousand hits on YouTube. The NSS sneered that “members of the City of Berkeley’s Peace and Justice Commission drew widespread ridicule when they publicly condemned the video as racist hate speech”.

Condell was nominated for the NSS’s Secularist of the Year award this year on the basis of his record in “answering back to the rule of political correctness, the thoughtlessness of religion generally and the increasing threat of Islam in our society”.

The NSS is treated by the media here as some sort of respectable voice for secularism. In reality, the NSS is not merely an advocate of the separation of church and state but rather a militant atheist sect whose hatred of Islam brings its supporters into association with the vilest right-wing anti-Muslim bigots.

It’s also worth noting that Richard Dawkins has regularly featured Condell’s videos on his own website, including Condell’s previous diatribe against the Park51 development. Dawkins rejected requests for that video to be removed. “I think it is well arguable that Islam is the greatest man-made force for evil in the world today”, he wrote. “Pat Condell is one of the few with the courage to say so.”

Will Dawkins be promoting Condell’s latest rant, we wonder, along with Pamela Geller, Robert Spencer and David Horowitz?