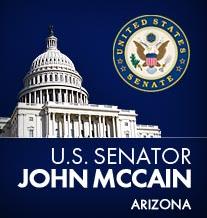 I can’t say I’m generally an admirer of John McCain but the statement he delivered on the floor of the US Senate today in defence of Hillary Clinton’s aide Huma Abedin against the paranoid accusations of Michele Bachmann and her colleagues really is worth reading.

Recently, it has been alleged that Huma, a Muslim American, is part of a nefarious conspiracy to harm the United States by unduly influencing U.S. foreign policy at the Department of State in favor of the Muslim Brotherhood and other Islamist causes. On June 13, five members of Congress wrote to the Deputy Inspector General of the Department of State, demanding that he begin an investigation into the possibility that Huma and other American officials are using their influence to promote the cause of the Muslim Brotherhood within the U.S. government. The information offered to support these serious allegations is based on a report, ‘The Muslim Brotherhood in America,’ produced by the Center for Security Policy.

To say that the accusations made in both documents are not substantiated by the evidence they offer is to be overly polite and diplomatic about it. It is far better, and more accurate, to talk straight: These allegations about Huma, and the report from which they are drawn, are nothing less than an unwarranted and unfounded attack on an honorable citizen, a dedicated American, and a loyal public servant.

The letter alleges that three members of Huma’s family are ‘connected to Muslim Brotherhood operatives and/or organizations.’ Never mind that one of those individuals, Huma’s father, passed away two decades ago. The letter and the report offer not one instance of an action, a decision, or a public position that Huma has taken while at the State Department that would lend credence to the charge that she is promoting anti-American activities within our government. Nor does either document offer any evidence of a direct impact that Huma may have had on one of the U.S. policies with which the authors of the letter and the producers of the report find fault. These sinister accusations rest solely on a few unspecified and unsubstantiated associations of members of Huma’s family, none of which have been shown to harm or threaten the United States in any way. These attacks on Huma have no logic, no basis, and no merit. And they need to stop now.