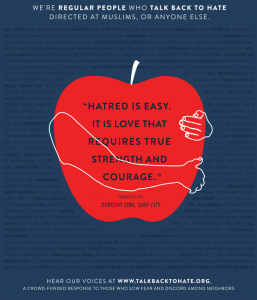 Called Talk Back to Hate, the campaign first launched its crowdfunding appeal in January in the aftermath of Hurricane Sandy, seeking to raise the money necessary to post advertisements in major subway stations from among the citizens of New York.

“I started the project because, like many people I’ve spoken to, these ads feel like an attack on our most basic communal values,” Akiva Freidlin, the creator of the project, said in an interview with ThinkProgress at the time. “They’re doubly offensive, for both attempting to demonize and intimidate individual members of a particular religious group, and trying to exploit the city’s grief and anger.”

Talk Back to Hate’s poster message was chosen from various suggestions submitted by contributors to the campaign. The image depicts a pair of arms wrapped around the Big Apple that is New York and the winning words “Hatred is easy. It is love that requires true strength.” The poster also features the names of those who donated to make the poster a reality. The ad is currently running at some of the New York subway’s most-trafficked stops, including Times Square and Rockefeller Center, as well as eight other locations throughout Manhattan and Brooklyn. Fundraising for asecond round of ads is already on-going.