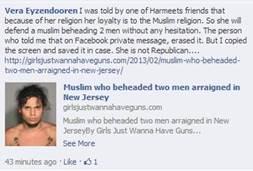 The leader of a San Bernardino County Republican club is being denounced for a Facebook posting that fellow conservatives are calling racist.

Vera Eyzendooren, president of the San Bernardino County Federation of Republican Women, accused a San Francisco attorney who is running for a leadership role in the state party of being a terrorist sympathizer, according to the San Francisco Chronicle.

“I was told by one of Harmeet’s friends that because of her religion, her loyalty is to the Muslim religion,” Eyzendooren wrote. “So she will defend a Muslim beheading two men without any hesitation … she is not Republican.”

Dhillon is a Sikh who emigrated from India as a child.