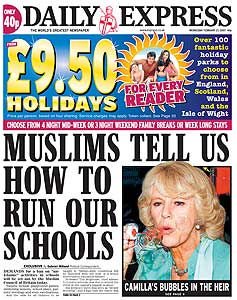 For the last few weeks the Sunday Telegraph has been running a series of witch-hunting articles on the so-called “Trojan Horse plot” in Birmingham. The author of the reports, not entirely unexpectedly, is the discredited stitch-up artist Andrew Gilligan.

In the absence of any real evidence of the existence of such a “plot”, Gilligan has followed his usual method of hyping up the material he has managed to gather and loudly proclaiming that his charges have been proved. His repeated uncritical references to the transparently forged letter that provoked the furore in the first place – the most he is prepared to concede is that it contains “a number of inaccuracies” – give us an indication of Gilligan’s commitment to journalistic honesty.

The latest report by Gilligan is headlined “Guide to school Islamisation, by ‘ringleader’ of Trojan Horse plot”. He assures Telegraph readers that  a “document” produced by the Muslim Council of Britain in 2007, and co-authored by Tahir Alam, offered “a detailed blueprint for the radical ‘Islamisation’ of secular state schools which closely resembles what appears to be happening in Birmingham”.

The “document” in question is in fact a 71-page pamphlet, Towards Greater Understanding: Meeting the Needs of Muslim Pupils in State Schools. The MCB’s website is currently down, but you can read it here. It was launched by the MCB at a public meeting in February 2007 and the right-wing press responded by launching a hysterical campaign against its proposals (see illustration). In an article for the Guardian, Tahir Alam himself publicly defended the arguments he and his fellow author, the then MCB secretary general Dr Muhammad Abdul Bari, had put forward in the pamphlet.

Gilligan doesn’t see fit to inform his readers of the background to this 2007 “document” – no doubt because the publication of Towards Greater Understanding further demolishes the idea of a “plot”. I mean, ask yourself, if you were an “Islamic radical” engaging in a secret conspiracy to take over schools in Birmingham, would you be so stupid as to openly announce your intentions beforehand, in a widely publicised pamphlet?

Even in the present climate of Islamophobia, it isn’t impossible for reporters to try and provide a balanced assessment of the issues in Birmingham. Chris Cook of Newsnight has a go here. His article is not without its flaws. He buys into the argument that religious conservatism (at least within the Muslim community) is suspect because it can “crossover” into violent extremism – apparently Muslims who believe in creationism should be treated as potential recruits to al-Qaeda. But Cook’s analysis is at least an attempt at responsible journalism – a genre which is entirely foreign to Andrew Gilligan.