The Hull Daily Mail reports that four men have been charged with various offences after they were arrested in connection with Saturday’s English Defence League march in the city.

The four men have been bailed on condition that they must not come back to Hull or meet in groups of more than five people until they appear at Hull Magistrates’ Court next month.

Despite the fact that a man was seriously injured and hospitalised after being attacked by an EDL demonstrator, the officer who was in charge of the policing operation on Saturday, Superintendent David Hall, told the Mail there was appropriate policing on the day and no risk of serious public disorder.

He said: “If I don’t feel I can provide adequate resources and if there was the risk of serious disorder on the intelligence and information I was given, then that’s when I would go to the chief constable. If I don’t feel I can prevent it I would be saying the local authority should be approached so they can apply to the Secretary of State for a banning order. I was confident on the day there was no risk of serious public disorder.”

He added: “Yes, there was an assault, but the response from the police was quick and we had that person in custody. We moved the EDL march on quickly.”

Some of us might think that a man being attacked and suffering concussion and a head wound requiring stitches did constitute serious public disorder. In addition, it has been reported that the EDL were “shouting Muslim obscenities” as they marched through the city and that they drunkenly showered passers-by with beer. Some of us might think that it is the duty of the police to defend law-abiding citizens from this sort of violence, intimidation and harassment.

The powers of the police are not limited to asking the local authority to apply to the home secretary for a march to be banned under Section 13 of the Public Order Act, they also have the authority under Section 14 to place restrictions on any static protest, ensuring that the EDL are kept well away from the people they have come to attack, intimidate and harass.

The problem, as Superintendent Hall’s response shows, is that the police are very often unwilling to exercise those powers.

Here, by the way, is the EDL’s response to the assault carried out by one of their members on Saturday: 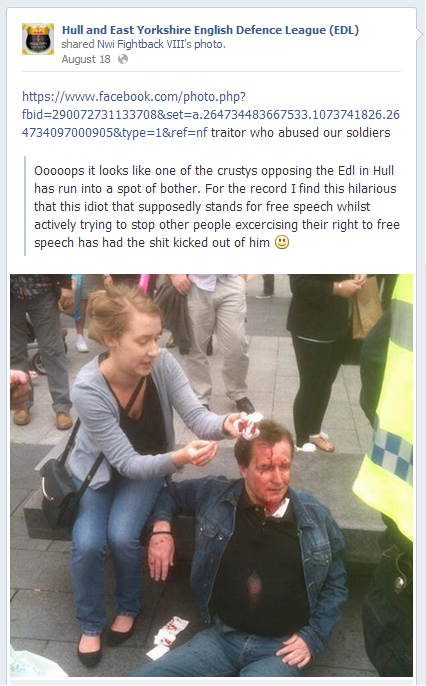