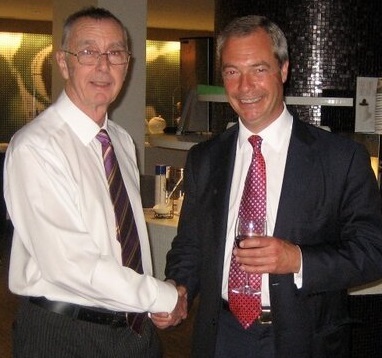 A UKIP councillor has been accused of “scaring people with made-up information” after he branded an Islamic procession in Ilford “a call to war”.

The parade was actually Jaloos, an annual Muslim event to commemorate the martyrdom of the first Shia Imam, Imam Ali. Jaloos is celebrated across the world with similar processions.

Epping Forest councillor Rod Butler, from the UK Independence Party, tweeted a link to a video of the Jaloos and said: “Nice Islamic call to war in Ilford Essex today. Police didn’t bother to intervene, they didn’t understand language.”

Cllr Rod Butler didn’t understand the language either, because according to local Muslim activist Ale Natiq, the ‘call to war’ he heard were actually Panjabi and Urdu hymns recalling the of the holy Imam to “rekindle the spirit of standing up to injustice and rejecting tyranny” – the opposite of a ‘call to war’.

Mr Natiq, who lives in Ilford, said of Cllr Butler’s tweet: “This clearly shows not just Rod’s lack of knowledge on the subject he is talking about but also sheer dishonesty. This was not a random event, it was a pre-planned event which takes place at this location every year with the permission of the council and the police.

“Rod has claimed that it was a ‘call for war’ but has failed to back it up with evidence. He claims police could not do anything because they didn’t understand the language but maybe Rod can translate and provide us evidence which part of the event/speech was a ‘call to war’?”

Responding to the comments, Cllr Butler – who did not attend the event – admitted he had “limited knowledge” of Islam and said he was grateful for Mr Natiq’s explanation.

“However to an onlooker who has no knowledge of this kind of event, the extremely large gathering could be quite frightening and intimidating,” he told London24’s sister paper, the Ilford Recorder.

“Tolerance is important and I hope that if there was a British event like this in an Arab country about the crucifixion and death of Jesus Christ, the host Arab country would be equally tolerant.

“We have seen events like this in the open many times before in other areas, and where translations were made, it was found that ‘preachers’ were actually inciting violence. Today our young are also being encouraged to take up arms and go to fight in Syria by ‘preachers’.

“It would be in the organisers’ interest to give a brief translation in English to members of the public who may be concerned, or possibly hold the event in a mosque where everyone there understands the history and the ritual of the event.”

Butler’s tweet is even worse than the London 24 and Ilford Recorder reports suggest. If you follow the link Butler provides, it takes you to the Facebook page of one Gavin Mooney, who posted a video of the Jaloos, accompanied by an explicit call to racist violence:

“Totally out of character for me and sorry for swearing but … For fuck sake, I only went into Ilford to go to sports direct and get greeted with this … !!! . . They don’t even translate into English. Ignorant bastards … Time for a cull … Fuming … !!!”

Dictionary definition of “cull”: “Reduce the population of (a wild animal) by selective slaughter.”

So, not only did Butler falsely accuse the Shia community of inciting violence, but he was in fact responsible for inciting it himself. 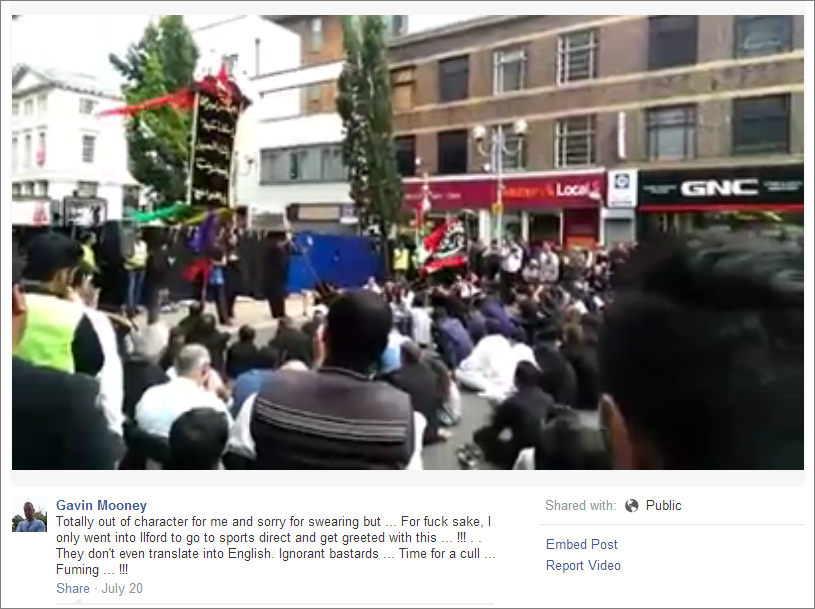