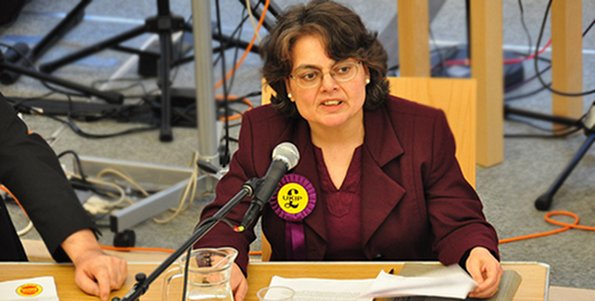 A candidate for UKIP has compared Islam’s holiest book to Adolf Hitler’s Mein Kampf, Political Scrapbook can reveal. Academic Julia Gasper – a former Westminster hopeful and current council candidate in Oxford – said the Koran was “fascist” and compared those who defend Islam to holocaust deniers.

Having dismissed comparisons between sections of the Koran and the Old Testament as “not valid”, Gasper responded to suggestions that her hateful bile was demonising Muslims:

Words like “demonization” are just self-deception. They are being used to persuade you to keep your eyes shut. In fact, the apologists for Islam are really very similiar to Holocaust deniers.

To compound matters, the rant comes to light as another UKIP candidate is suspended for expressing sympathies with Norwegian mass-murder Anders Breivik – and just days after Julia Gasper herself was slammed for saying gays should stop “complaining about persecution” and start thanking straight people for giving birth to them.

Looks like they’ll be making that a double suspension then.

No doubt Gasper’s comments will prove something of an embarrassment to UKIP leader Nigel Farage, who has been trying to shift his party away, if only slightly, from its hardline Islamophobic stance. The action taken against Steve Moxon over his pro-Breivik comments is a case in point (though Moxon remains a party member). Farage has even gone so far as to distance himself from UKIP’s policy of demanding a ban on the face veil. He has evidently calculated – correctly, judging by recent opinion polls – that the party stands to make gains by attracting disaffected Tories and that it will hardly encourage this development if UKIP comes over as a gang of rabid anti-Muslim bigots barely distinguishable from the EDL or BNP.

Unfortunately for Farage, however, the sort of sentiments expressed by Gasper are common currency in UKIP. Farage’s predecessor as party leader, Lord Pearson, actively aligned himself with views of the international counterjihadist movement, winning himself plaudits from the likes of Pamela Geller. Pearson notoriously invited Geert Wilders – whose comparison of the Qur’an to Mein Kampf Gasper was presumably defending – to show his film Fitna at the House of Lords. The UKIP candidate in last year’s Leicester South parliamentary by-election, Abhijit Pandya, made the news when he declared his support for Wilders’ view that Islam is a retarded ideology and described the faith as “morally flawed and degenerate”.

So Gasper’s comments will be a test of how strong a line Farage is prepared to take against the counterjihadist element within UKIP. My bet is that he will balk at risking a public fight with a substantial section of his own party, so the chances of Gasper being disciplined are slim.