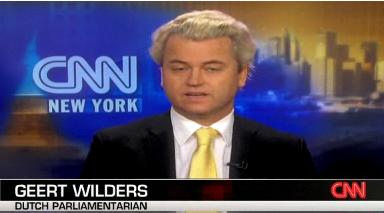 The fiercely anti-Islam Dutch MP Geert Wilders has been traveling through the U.S. this week on a highly-publicised trip to meet with politicians, promote his controversial film “Fitna”, and raise money for his legal defence back home.

Although Wilders’s stated goal has been to campaign for free speech, his trip has been sponsored and promoted by an unlikely coalition of groups united primarily by their hostility towards Islam. His backers include neoconservative and right-wing Jewish groups on the one hand and figures with ties to the European far right on the other.

Since he was charged with incitement to hate and discrimination in the Netherlands in January and denied entry to Britain earlier this month on public safety grounds, Wilders has become something of a cause celebre for the U.S. right.

This week, he gave a private viewing of his 17-minute anti-Islam film in the U.S. Senate, where he was hosted by Senator Jon Kyl, an Arizona Republican. He also appeared on Bill O’Reilly’s and Glenn Beck’s popular right-wing TV shows, met privately with the Wall Street Journal editorial board, and hobnobbed with former U.N. ambassador John Bolton at the Conservative Political Action Conference (CPAC).

On Friday, he capped his busy week with an appearance at the National Press Club. At the event, he reiterated his calls for a halt to immigration from Muslim countries and pronounced, to raucous applause from the audience, that “our Western culture based on Christianity, Judaism, and humanism is in every aspect better than Islamic culture”.

His chief sponsors during the trip have primarily been neoconservative organisations such as Frank Gaffney’s Centre for Security Policy, David Horowitz’s Freedom Centre, and Daniel Pipes’s Middle East Forum, which is also helping to raise money for Wilders’s legal defence.

An event he held at a Boston-area synagogue was sponsored by the Republican Jewish Coalition, an influential group whose board members include casino mogul Sheldon Adelson, former White House press secretary Ari Fleischer, and neoconservative writer David Frum, who attended Wilders’s Friday event in Washington.

His trip has also been heavily promoted by conservative blogger Pamela Geller, who sponsored a reception for him in Washington on Friday. Geller is perhaps best known for alleging during the 2008 presidential campaign that now-President Barack Obama is the illegitimate child of the late Nation of Islam leader Malcolm X; she also continues to argue that Obama is a secret Muslim.

A less well-known but key backer of Wilders’s trip has been the newly-formed International Free Press Society (IFPS), which is headed by Danish journalist Lars Hedegaard and upon whose advisory board Wilders sits. The IFPS has been instrumental in promoting Wilders’ case as a free-speech issue, joining him in calling for an “International First Amendment”, and it was a co-sponsor of Friday’s event at the National Press Club.

While the IFPS has strong ties to neoconservatives – its staff includes members of Pipes’s and Gaffney’s organisations – it also has ties to the European far right, and specifically the Belgian rightist party Vlaams Belang (VB), or Flemish Interest.

The IFPS’s vice president Paul Belien is married to Vlaams Belang MP Alexandra Colen, and has been a fierce defender of the party against its critics. And in 2007, Hedegaard and Belien – along with IFPS board members Bat Ye’or, Andrew Bostom, Robert Spencer, and Sam Solomon – appeared with VB leader Filip Dewinter at the CounterJihad conference in Brussels. Although “the VB did not organise the conference, it provided an important part of the logistics and the security of those attending,” according to Belien.