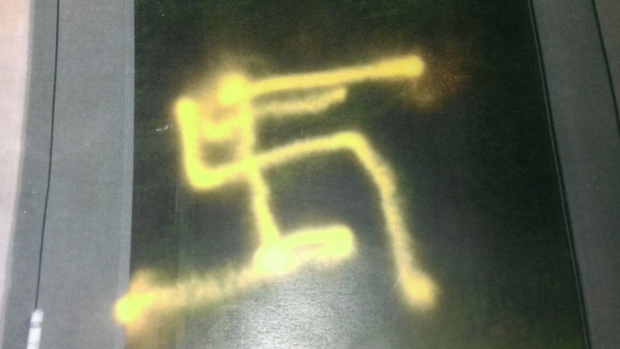 What appears to be a swastika spray painted on the Islamic Center of Morris County is “disgraceful,” said Dr. Aref Assaf, one of its directors. “We’re very concerned about this,” Assaf said.

Police are still investigating the vandalism, and whether it was a hate crime, said Kyle Schwarzmann, Rockaway Borough detective sergeant. The New Jersey chapter of the Council on American-Islamic Relations said police should investigate the incident as a possible hate crime.

“Because of the nature of this incident and because of other recent incidents targeting American mosques, we urge local, state and federal law enforcement authorities to investigate a possible bias motive,” said Khurrum Ali, CAIR-NJ’s civil rights director.

Security footage shows a woman driving her car into the parking lot at 1 Mannino Drive, getting out and then spray painting the symbol on a glass door around 7 p.m. June 21, Assaf said. She then got back into her car and drove away, Assaf said. The woman looked to be in either her late teens or 20s with dark hair, Assaf said.

The director said the center opened three years ago, and it was the first time it has been vandalized. He said he hopes it’s the last time, too.

“We don’t want to blow it out of proportion,” Assaf said. “We’re not looking to play victim. But we think this is an act of vandalism that need to be prosecuted. it’s now in the hands of the police to locate the person or persons who did this crime. And we’re asking anyone who might have seen anything to bring the matter to police so we can bring this to a conclusion.”