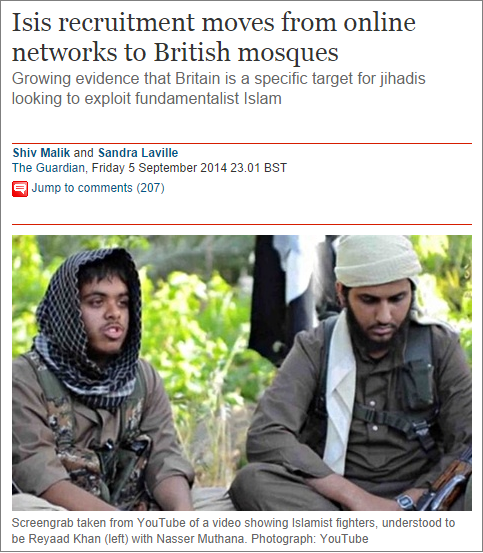 “Isis recruitment moves on from online networks to British mosques.” Seriously, that’s the title of a report in the Guardian, of all newspapers.

We know that right-wing tabloids have a disgraceful record of publishing inflammatory headlines about British Muslims that lack any factual basis, but you might have thought a progressive broadsheet which claims to uphold journalistic standards would feel obliged to come up with some solid evidence to justify such a damaging accusation. The Guardian article provides none.

The springboard for the allegations that British mosques are being used to facilitate recruitment to a terrorist organisation is an interview with a 19-year-old ISIS supporter named Abdullah, who uses the Twitter handle JihadWitness. He is reported as saying that he “believed active recruitment was now taking place in mosques and other centres across Europe following Isis successes and their announcement that they had established a theological state, or caliphate (khilafah) spanning Syria and Iraq”. He asserts that ISIS is particularly interested in the UK where there is “a large minority of Salafis”.

Evidently the Guardian thinks it’s appropriate to give credence to unsubstantiated claims about links between British mosques and terrorism, made by some obscure jihadi sympathiser whose Twitter feed consists of a stream of admiring comments about extremists around the world, from al-Shabab in Somalia to Abdullah el-Faisal in Jamaica. Did the Guardian‘s journalists make any effort to establish that “Abdullah” is in a position to give an informed account of ISIS’s recruitment techniques in the UK, rather than being just some deluded teenage fantasist?

You would suspect not, given that the Guardian‘s report is co-authored by none other than Shiv Malik. Some years ago Malik was heavily involved in the promotion of an individual named Hassan Butt, who claimed that, before renouncing terrorism, he had acted as a recruiter for Osama bin Laden and helped to send scores of British Muslims to al-Qaeda training camps. Malik even wrote a book with Butt entitled Leaving Al Qaeda: Inside the Life and Mind of a British Jihadist. Alas, the book never saw the light of day, because shortly before it was due to be published Butt confessed to being a fraud and a liar who had never played any kind of role at all in al-Qaeda. He said he had taken Malik for a “right patsy”.

In any case, why should ISIS particularly target Salafis? Malik and his co-author, Guardian crime correspondent Sandra Laville, helpfully explain: “The Salafist strands in Islam tend to promote a fundamentalist outlook, a strict adherence to sharia law and a belief that it is incumbent on believers to fight holy war, or jihad.” A former imam at the Jalalia mosque in Cardiff, who resigned following a dispute over the mosque giving a platform to an unnamed Salafi speaker, is quoted as saying: “People don’t understand the relationship between Salafism and terrorism.”

The aim of all this is to smear a legitimate trend within the Muslim community, which vigorously opposes terrorism, as somehow connected to ISIS. The faulty reasoning underpinning it is that conservative religious views pave the way to violent extremism.

Here again, Shiv Malik has past form. He first achieved notoriety a decade ago through witch-hunting Hizb ut-Tahrir, an entirely peaceful organisation that firmly rejects the methods of organisations like al-Qaeda. But Malik energetically advocated Zeyno Baran’s discredited “conveyor belt” theory, according to which HT’s non-violent “extremism” provides a path to political violence, in order to falsely depict the organisation as an antechamber to terrorism. Malik even announced the previously unheard-of claim that Abu Musab al-Zarqawi and Khalid Sheikh Mohammed were former members of HT. That accusation has been regularly repeated ever since in order to attack HT, but the sole source for it is Malik’s article. It appears to have no basis in reality.

In their Guardian report, Malik and Laville make much of developments in Cardiff, which we are invited to believe is a hotbed of extremist preachers. Particular significance is attached to the fact that three young Muslims – Nasser Muthana, Assel Muthana and Reyaad Khan – who travelled to Syria and joined ISIS reportedly worshipped at the city’s Al Manar Centre. But the most the Guardian‘s reporters can come up with by way of evidence that the mosque is implicated in recruitment to ISIS is the shock revelation that the Charity Commission is “examining” the Al Manar Centre Trust.

(This was seized on by the Daily Mail, who reported the news under the headline “Investigation launched into possible extremist links at Cardiff mosque where three British jihadis worshipped”. The Charity Commission in fact told the Mail that it is “engaged” with ACT over unspecified “regulatory issues” but is “not formally investigating” the Trust.)

Far from promoting or condoning terrorist recruitment, the Al Manar Centre has in fact been unequivocal in its opposition to anyone going to Syria to fight, especially for ISIS.

The centre’s representatives were co-signatories to a statement by the Muslim Council of Wales in June, issued in response to the news that the three Cardiff Muslims had joined ISIS, which declared that “we condemn those who have recruited these young and impressionable individuals with false promises and a twisted version of Islam”.

A further statement at the time by the Al Manar Centre Trust pointed out that “ACT’s stance is well known, that we are opposed to going to Syria or any other country, to participate in an armed struggle and have always made this clear. We have on many occasions tackled the issues of extreme ideologies. Indeed, feeling the responsibilities towards our local community, especially those concerning the youth, we have engaged with parents warning against such dangers.”

On Friday, the Guardian itself reported that the Al Manar Centre has emphasised that ISIS’s Cardiff recruits “learned nothing of fighting abroad from the mosque” and that if the young men had discussed their plans with anyone from the centre “they would have been categorically dissuaded from taking this particular action”. Al Manar also pointed out that the accusations against the mosque derived from “a non-evidence based and highly-contentious theory that there is somehow a specific conveyor-belt to violence”.

In other words, there are absolutely no grounds for believing that the Al Manar Centre helped to persuade the young men to join ISIS, still less that developments in Cardiff provide any justification for a ludicrous fantasy about British mosques being used to assist terrorist recruitment.

The Guardian article then moves on to Birmingham where, we are told, “a leaked police report published this week reveals that extremists are providing support and facilitation for those wishing up travel abroad to fight”. In fact the report had already received extensive coverage last October in the Birmingham Mail (which stated that it had been “published online” rather than leaked). The report states that locations “such as gyms, restaurants and cafes, are used to facilitate extremist activity by allowing key figures spaces to operate and promulgate their message”.

This suggests that extremists actually avoid mosques when carrying out their activity – presumably because they know they are not welcome there and would certainly be reported to the police if they were seen to be planning violence.

The article closes with a section on the case of Mohammed el-Araj, a young Muslim from west London who went to Syria to fight and was killed there in August last year. His father is quoted as saying: “Any time I asked, when I arrived home, and ask ‘where is he’ … he’d be at the mosque. I don’t know which mosque. I wish I knew the mosque. Because I was seriously angry. I want to catch any of these imams and want to find out how they make these young boys [do this].”

So the angry outburst of a grieving parent, who doesn’t even know which mosque his son attended, still less whether it played any role at all in persuading him to go and fight in Syria, is used to bolster the narrative of mosques serving as a network for recruitment to ISIS. This really is scraping the barrel.

Still, the Guardian‘s article went down well in some circles. It provided the basis for a report by Breitbart News, which informed its readers that “Islamic State militants, buoyed by military success yet squeezed online by Western cyber-security initiatives are now openly recruiting in European mosques, according to claims published by The Guardian”. This report in turn was taken up by Pamela Geller, who claimed that it vindicated her own paranoid ravings about mosques being used to recruit terrorists.

When you have a liberal and supposedly progressive newspaper providing ammunition for hate-mongers like Geller, something has gone seriously wrong. The Guardian should think twice before it publishes any more ill-founded, inflammatory nonsense by Shiv Malik.