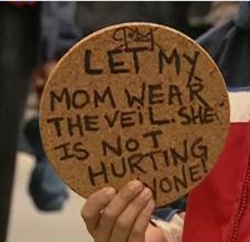 Secularism penalizes practitioners of some religions more than others, a conference on a bill to ban the niqab face veil from schools, hospitals and government offices was told yesterday.

“It works best with Protestantism. It’s a little more awkward with Catholicism. It’s quite a poor fit with Judaism and Islam,” Wendy Brown, Heller Professor of political science at the University of California at Berkeley, said at the meeting at Concordia University. It was organized by the Centre de recherches interdisciplinaires sur la diversite au Quebec, a non-profit research institute.

Secularism is based on the belief that the state should be neutral toward different religions. But in fact, it favours those whose cultural heritage is Christian, she said. “All religions don’t comport equally well with that model. Muslims who might consider themselves secular are not perceived as such simply because of the clothing they wear or the fact that they might pray in public. If a Christian were to do that, we might think of them as a zealot,” Brown added.

She was among academics from the U.S., Belgium, France and local universities at the conference on Bill 94, which will require citizens to uncover their faces when giving or receiving government services, whether in hospitals, schools, day-care centres, universities, social services or government offices.

Brown added that it is a mistake to equate secularism and women’s equality. In a presentation yesterday, she contrasted fashion photographs of four-inch heels with images of modestly clad Muslim women to cast doubt on the assumption that western women enjoy greater freedom from male influence. “Much of the debate about burqa and hijab casts us as free, equal, and emancipated and them as un-free, unequal, and living by the rule of religion, and that’s nonsense,” Brown said.