The Sun wasn’t alone in jumping to the immediate conclusion that “Islamist fanatics” were behind the terror attacks in Norway.

A piece by Jerome Taylor in the Independent, headed “Analysis: Jihadist networks have long singled out Norway”, stated:

Jihadist networks have long singled out Norway as a legitimate – if low priority – target. As early as 2003 al-Qa’ida’s then number two and now leader Ayman al-Zawahiri specifically called on militants to attack the country in an audiotape condemning the invasion of Iraq. Norway also continues to have a small contingent of troops in northern Afghanistan.

The source given to back up this speculation, which had no basis in any actual evidence that had emerged regarding the events in Norway, was Quilliam’s James Brandon, who was quoted as saying:

Norway is part of Nato’s mission in Afghanistan and as far as jihadists are concerned, any country involved in what they see as an illegal occupation of Muslim territory is a legitimate target.

Brandon’s contribution was typical of the ignorant and irresponsible response from the “world’s first counter-extremism think tank”. Inayat Bunglawala points out that, as the situation unfolded in Norway, a whole series of tweets from Quilliam tried to pin the blame on Islamists, which in turn inspired an article by Will Heaven in the Telegraph. 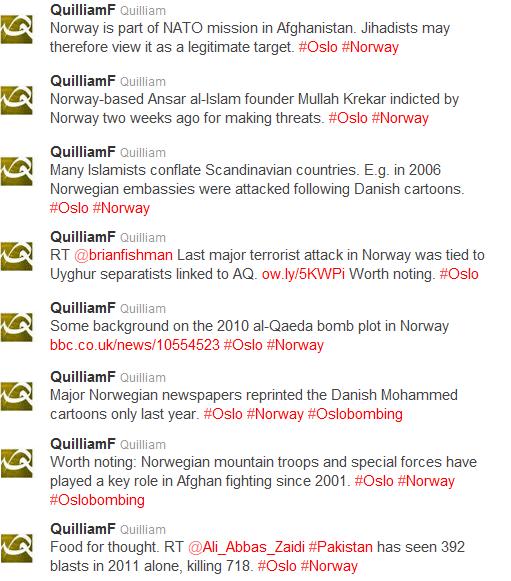 The only alternative explanation that Quilliam was prepared to consider was that the Libyan government might be behind the attacks:

In response to critics, one of whom had observed “Silly to rule out ANY eventuality but u guys are obv BEGGING for Muslim complicity. Suppose it keeps u in business”, Quilliam tweeted:

Indeed, from the start Quilliam were keen to rule out far-right involvement in the atrocities:

It wasn’t until late in the day that Quilliam were prepared to countenance even the theoretical possibility that a right-wing extremist might be responsible:

And then only to dismiss this as an unlikely prospect. The Reuters article quoted Maajid Nawaz as saying: “We need to be cautious because so little is known [not a consideration that had influenced Quilliam’s response up to that point, of course], but a bombing of this sort is either the work of far-right or Islamist militants. Of the two, Islamists are the more likely.”

When the realisation finally dawned that the individual arrested over the atrocities was indeed a right-wing extremist, Quilliam implemented a swift u-turn and banged out a press release in which James Brandon pontificated:

The terrible events in Norway show that extremism, violence and terrorism are not confined to any one race or religion. There are extremists in all communities and all societies…. While the main terrorist threat to democratic societies around the world still comes from Islamist extremists, the horrific events in Norway are a reminder that white far-right extremism is also a major and possibly growing threat.

In fact there are no grounds at all for the assertion that Islamist extremists pose the main threat of terrorism, at least in Europe. Europol reports show that in 2010 only 3 out of 249 terrorist attacks in the EU were carried out by Muslims and in 2009 the figure was 1 out of 294.

The reality is that, although there was no solid evidence at any point that Islamists were behind the Norway attacks, Quilliam repeatedly insisted that it was the most likely scenario. And this was in circumstances where EDL supporters and other racists were whipping themselves up into a fury in the belief that “Muslim terrorists” were responsible for the killings. Perhaps Quilliam should be grateful that the facts of the situation became clear before some deranged Islamophobe saw fit to take out their anger on the Muslim community in Britain.

I don’t think any self-proclaimed expert in the field of violent extremism has made such a fool of themselves since Steven Emerson confidently declared that the 1995 bombing of the Oklahoma City Federal Building, carried out Timothy McVeigh, was undoubtedly the work of terrorists from the Middle East. From then on, Emerson’s claim to possess some specialist understanding of terrorism was treated as a bad joke. Hopefully the terrible events in Norway will have similar consequences for Quilliam.

Update:  Judging by the Sun‘s initial editorial on the Norway attacks, which is reproduced by Tabloid Watch, it looks as though that paper too was influenced by Quilliam’s misleading analysis. Here are some excerpts from the editorial:

Terrorism, the scourge of the West, brought slaughter yesterday to the friendly and civilised streets of one of Europe’s most peaceful nations…. Why Norway? The answer is simple. Because it is brave. It is a loyal member of NATO and plays its part in Afghanistan and Libya. It has courageously stood up to Muslim fanatics trying to stir up hatred in Norway…. We do not know if yesterday was the work of al-Qaeda, which has threatened Norway before, or Libyan madman Gaddafi, who has vowed revenge on NATO.