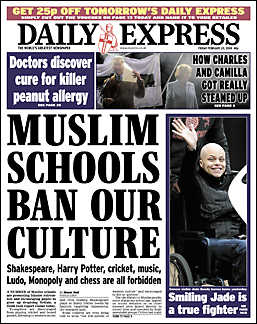 A number of Muslim schools are promoting Islamic extremism and encouraging pupils to grow up despising Britain, a think tank report claims today.

Youngsters are discouraged from playing cricket and board games, listening to western music and even reading Shakespeare plays or Harry Potter books by fanatics targeting classrooms, the research says.

Some children are even being told to shun “the evil system of western culture” and encouraged to live in “ghettos”.

The vile diktats to Muslim pupils, some of primary school age, appear on school websites or on other internet sites linked directly to school sites and operated by fund amentalist groups. Critics last night called for strict vetting of Muslim education to root out extremist influence. Moderate Muslim groups welcomed the findings and called for the attempts by extremists to target children to be stamped out.

The propaganda is highlighted in a report called Music, Chess and Other Sins from the Westminster-based think tank Civitas. Author Denis MacEoin investigated hundreds of school websites and Islamic websites linked to schools to uncover the material.

The Express editorial is headed “Britain must stand up for its time-honoured values”. We are told: “Before mass immigration got under way in the middle of the last century, Britain was a country blessed with a cohesive culture. It isn’t now….Things have now reached a point where some Muslim schools ban such pillars of British life as chess, Shakespeare and even the very idea of women’s equality….This is a disastrous state of affairs, meaning young Muslims are bound to grow up confused and alienated. Experience tells us that some will become the Islamist terrorists of tomorrow.”

The Telegraph went with “The Muslim children taught to hate Britain” and the article began: “Islamic fundamentalism that encourages children to despise British society is being promoted on websites at Muslim schools in the UK, think tank Civitas has revealed.”

This has now been amended so the headline reads “Islamic fundamentalism promoted on websites at some Muslim schools in the UK, think tank finds” and the opening sentence now also includes the word “some” before “Muslim schools”.

MacEoin himself contributes an article headlined “We must stop Muslim schools teaching that integration is a sin” although the online version now carries the standfirst: “Some Muslim schools make it their mission to prevent assimiliation – and it is time the Government changed that, says Denis MacEoin.”

And a Telegraph editorial recycles the familiar right-wing myth about Christians being discriminated against in favour of Muslims: “Sneering at Christianity is routine. Perhaps that is an inevitable consequence of living in a free society – but it is interesting that militant atheists clam up when it is suggested that Islam might be a target for ridicule. [What planet do Torygraph leaders writers live on? Have they never come across Richard Dawkins?] And when was the last time a Muslim woman was banned from wearing a small symbol of her faith? This double standard runs through the government sector and the intelligentsia.”

The Times announces: “Ofsted accused of soft line on Muslims.”

Amanda Platell’s comment piece in the Daily Mail is headlined: “Schooling children to hate our values” (“schools like these risk breeding a new generation of Islamic fundamentalists, whose hatred of the West may very well spill over into acts of violence – or even murder. How can we tolerate such hatred in our midst?”).

The Daily Star has “Islam kids taught forget Potter and prepare for jihad“.

See also ENGAGE which reproduces the following poll from the Star: 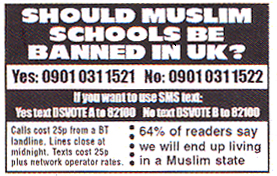