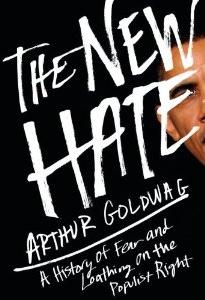 Extremist political conspiracies such as “birthers” and “truthers” may be a dominant theme of post-9/11 America, but in a new book by Arthur Goldwag, he argues that modern conservative groups may be a product of history repeating itself.

In Goldwag’s book, “The New Hate: A History of Fear and Loathing on the Populist Right,” due out on February 7, the author traced the historical origins of rhetoric and ideologies associated with birtherism, Islamophobia, anti-immigration sentiment and other touchstones of modern conservative factions such as the Tea Party movement.

Throughout his book, Goldwag highlighted similarities in rhetoric between such past movements and some present political discourse, drawing parallels between anti-Semitic and anti-Catholic literature from 100 years ago and statements from contemporary politicians and commentators concerned that Muslims represent a threat to America’s security and way of life.

“If you read the really anti-Islamic stuff, it reads exactly like the anti-Semitic stuff from the 1920s,” Goldwag told Reuters. “It has this totalizing quality, projecting immutable characteristics onto a whole class of people, and it’s never going to be true if you do that.”