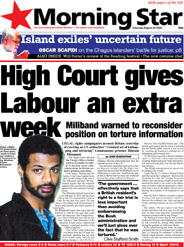 The High Court allowed the Foreign Office a further week to reconsider its refusal to disclose secret information about the British resident’s detention and torture.

Lord Justice Thomas and Mr Justice Lloyd Jones handed down their second ruling on the case of the Ethiopian national. Mr Mohamed argues that the material supports his case that the evidence against him was extracted through torture.

The Ethiopian national was arrested in Pakistan in 2002 and has been held at the US concentration camp in Cuba for the past four years. He now faces a US military trial for terrorism offences and possibly the death penalty if found guilty.

Mr Mohamed’s legal team argue that the material is vital for his case and could prove his innocence. But Foreign Secretary David Miliband says that he has been “advised” that disclosure of the material would cause “significant damage to national security of the United Kingdom.”

The “advice” came in the form of a threat from the US State Department, claiming that any such move would cause “serious and lasting damage to the US-UK intelligence-sharing relationship and, thus, the national security of the UK.”

In a statement on Friday, legal action charity Reprieve revealed that the High Court judges had decided that Mr Miliband’s secret submission to court was “insufficiently supported in that he had not taken into sufficient account the torture suffered by Binyam.”

Director Clive Stafford Smith said: “The British government has the nerve to pretend that the British public interest is best served by covering up America’s criminal act of kidnapping and torturing him.

“It effectively says that a British resident’s right to a fair trial is less important than avoiding embarrassing the Bush administration and we’ll just gloss over the fact that he was tortured.

“But British national security cannot ever be enhanced by torture.”

Leigh Day & Co solicitor Richard Stein said that Friday’s judgment “discloses the shocking fact that the Foreign Secretary failed to give any proper weight in secret submissions he made to the court to the abhorrence of torture when he purported to determine that it was in the public interest not to disclose the evidence of ill-treatment to our client.”

Stop the War Coalition convener Lindsey German said that government refusal to disclose the evidence was “part and parcel of the continued attacks on our civil liberties.”

She added: “We just cannot trust these people after they took us to war on a lie and now we have seen long-time Guantanamo detainees released without any charges.”

Mr Mohamed claims that he was secretly rendered to Morocco and Afghanistan, where he was tortured by, among other methods, having his genitals cut with razor blades.

In the initial hearing last week, the judges concluded that the government was “under a duty” to “disclose in confidence” to Mr Mohamed’s legal advisers certain information “which is not only necessary but essential for his defence.”