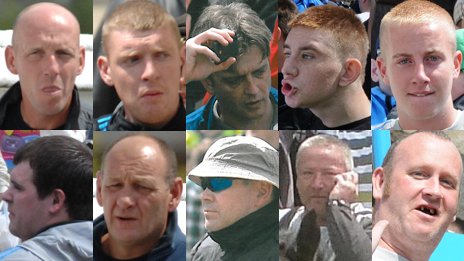 CCTV images have been released of 10 men police want to speak to over public order offences which took place in West Yorkshire earlier this year.

Police are investigating disorder during an English Defence League (EDL) demonstration in Halifax on 9 July. So far six people have been arrested for public offences related to the disturbance. West Yorkshire Police are urging anyone who recognises the men or has information to contact the police.

“Like any large scale operation it is not always possible to tackle every single incident at the time and this is where our follow up inquiries begin. Subsequent inquiries have revealed that some individuals were seen to be committing offences and were captured on CCTV. Someone must know who they are and where they live and we ask them to ring us so this investigation can begin to draw to a close.”

Police said the 10 men they want to trace could be living in the Midlands and the north of England.