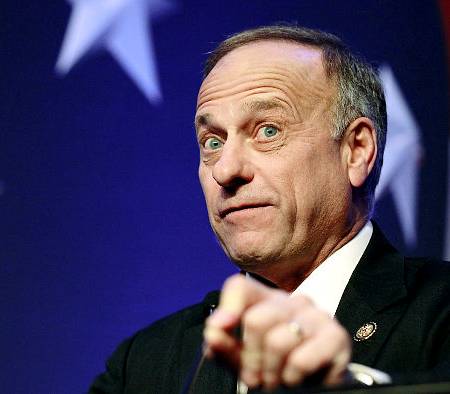 Iowa Republican Rep. Steve King is calling for the U.S. government to begin spying on American mosques to stop ISIS’ recruitment efforts, charging the militant organization is actively operating in mosques across the country.

Although there is no evidence that ISIS is running a nationwide recruitment effort or using mosques as centers to target would be jihadis, King insisted the Obama administration must target mosques for domestic surveillance activities.

“Here’s a thought that occurred to me,” King said speaking to the Deace Show Thursday. “I didn’t look at the population of Germany at the beginning of the Third Reich but it’s probably in the area of 70-80 million is my guess. And out of that Hitler in a few years build something that cost the lives of roughly 60 million people. The radical islamists have 1.3 or more billion muslims to work with. Now they aren’t all supporters. Daniel (inaudible) says 10-15% of them, but that is a huge population to draw from.”

King said ISIS recruiters were “certainly in the United States,” citing mosques in Virginia and Minneapolis to say mosques were the “communications centers” for ISIS.

“They are all over the world. They’re certainly in the United States. They’re recruiting fighters for ISIS right out of Minneapolis out of the Somali enclave. And that’s going on in other parts of the country too.”

King said another area that ISIS recruitment was going on was “the largest mosque in Virginia.”

“So they have a network that they flow in. And it isn’t that all muslims are a supporter of ISIS but the network that flows through the mosques is certainly the communications centers. We ought to be looking at this dot to dot. And we ought to have people in those mosques watching to see what’s going on,” the conservative Republican argued.

King – who is one of loudest critics of President Obama’s immigration polices – said the president refused to secure the border because “undocumented Democrats are more important to him than national security.”

“And we ought to be just secure our border, secure our border. We are spending more than enough resources to get 99.9% control of our border. We refuse to do it because we have a president who refuses to enforce the law because he’s got political gain on the over side. Undocumented Democrats are more important to him than national security,” King charged.