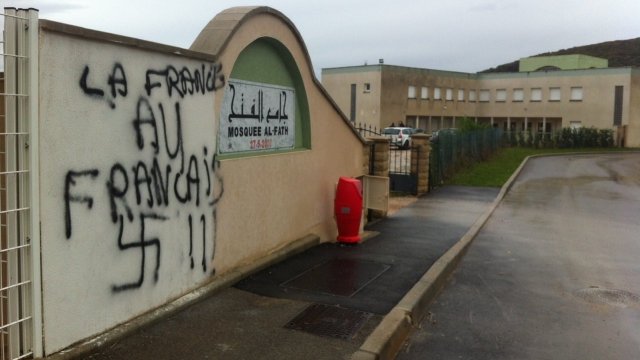 La Dépêche reports that two mosques at Besançon in eastern France have been desecrated with racist and fascist graffiti.

Three swastikas, accompanied by the slogans “France for the French”, “Vive la France”, “Arabs out” and “death to Muslims” were sprayed on the Al-Fath mosque. A swastika and the words “Long live the FN” (Front National) were also found on the wall of the Souna mosque.

This is not the first time the mosques have been attacked. In August, an SS sign, a Celtic cross an Odal rune and the words “Vive la France” were sprayed on the Souna mosque. In February, Star of David graffiti was daubed on both the Souna and Al-Fath mosques.