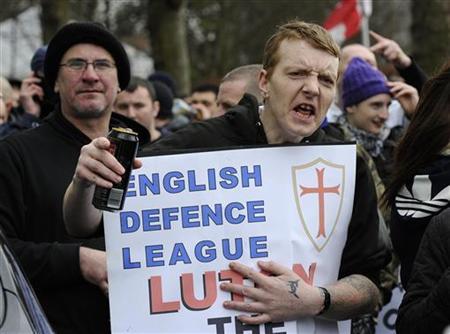 Police want to restrict the sale of alcohol during the English Defence League’s proposed march next month. Senior officers are exploring ways of ensuring people travelling to the EDL’s planned demonstration on Saturday, February 4, will not be able to buy alcohol in shops and pubs before, during and after their protest.

When the group last staged a major protest in Leicester, in October 2010, a number of pubs remained closed. However, the EDL made a point of negotiating access to pubs and its supporters were escorted to venues in Hotel Street which had agreed to serve them. The decision to allow them to drink was later criticised in some quarters after violence broke out in Humberstone Gate East.

No doubt Spiked will have some strong words to say about this outrageous attack on EDL members’ basic democratic right to get pissed and racially abuse Muslims.