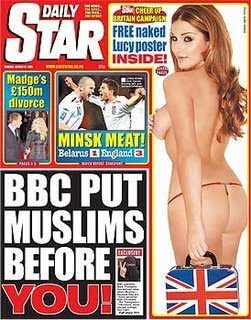 Only last Wednesday an editorial in the Daily Star was claiming that there was “visibly growing support” for the English Defence League, which was “attracting people across Britain to its ranks”.

EDL leader Stephen Lennon (“Tommy Robinson”) was quoted as saying that EDL members “have no problems with race” and that their only objection is to “barbaric” Islam.

Commenting on the EDL’s supposed threat to field candidates in parliamentary and council elections, the Star observed that the organisation “could soon become a political force”, in which case “Tommy and his followers will have to be taken very seriously”.

What a difference four days can make.

The Star has now done a 180-degree turn on the EDL. An editorial in today’s issue attacks the EDL’s claim to be “non-racist, non-violent and the voice of reason against the spread of Islamic fundamentalism in this country”. It dismisses the EDL as an organisation whose “membership is tiny” and refers to the criminal records of some of its leading figures.

The editorial concludes that “blaming all our problems on innocent God-fearing Muslims is not the answer” and pledges that “we’ll never stop making that clear to the rag-tag bunch of thugs called the EDL”.

Could it be that Star‘s owner Richard Desmond was seriously embarrassed by the adverse publicity he received over his paper’s backing for the EDL and has ordered a change of line?

The transformation of the Star‘s editorial line on the EDL extends to its reporting.

The front page of last Wednesday’s issue notoriously featured a headline declaring “English Defence League to form political party”. The accompanying article included a sympathetic interview with Stephen Lennon, who was given a platform to claim that the EDL would soon have more Facebook followers than the Tories or Lib Dems, outline his organisation’s plan to ban the Qur’an and reveal his ambition to appear on the BBC’s Question Time.

The previous day the Star had given a boost to the EDL’s planned protest in Birmingham next month (which has since been postponed). An article headlined “English Defence League: We’ll stand up and fight for Britain’s brave heros” began:

“The English Defence League (EDL) is planning a huge march after two Muslim councillors snubbed a British war hero given the George Cross. Councillors Salma Yaqoob and Mohammed Ishtiaq caused fury by sitting down as more than 100 other politicians gave L/Cpl Matthew Croucher a standing ovation at a civic event.”

However, it was obvious even from the Star‘s own report that Lennon had no immediate plans to set up a political party, while the EDL’s publicity for its Birmingham protest did not include any reference to Salma Yaqoob and Mohammed Ishtiaq’s so-called “snub” of L/Cpl Croucher. It appeared that it was the Star itself that was putting pressure on the EDL to stand for elections and to target the two Respect councillors. The paper was not merely championing the EDL – it was proposing their political tactics to them.

What a contrast the coverage of the EDL in today’s Star presents.

One article reports that “Lennon admits that the group, made up of football hooligans and other hoodlums, has no hope of becoming a political party”. No mention is made of the fact that it was the Staritself, rather than Lennon, who was pushing the line that the EDL was about to enter electoral politics and posed a serious threat to the established parties.

On the matter of Matthew Croucher, the Star now reports: “A hero Marine has slammed far-right extremists who claim they will be marching in his name at an anti-Muslim demonstration. The English Defence League say they will parade on behalf of George Cross winner Matt Croucher in Birmingham next month. They claim to be outraged after Muslim councillors failed to join in a standing ovation for the Royal Marines Reserve…. He said: ‘They won’t be marching in my name and I won’t be joining them’.”

The Star even accuses Lennon of attempting to “hijack the issue by announcing a March 19 demo on behalf of Matt”. Again, no mention is made of the fact that it was the Star itself rather than the EDL who was pushing the idea that the proposed demo should concentrate on that particular issue.

As for the EDL leader’s claim that his organisation is not racist, theStar is now prepared to accept the well-known fact that “Lennon has experience of far-right politics dating back several years. He joined the British National Party in 2004 and attended at least one BNP meeting in Luton in 2007.” (For a photo of Lennon at the 2007 BNP meeting, which was addressed by the veteran fascist Richard Edmonds, see here.)

Of course, it is good that the Star‘s “Hurrah for the Blackshirts” moment appears to have passed and that the EDL will not have a daily paper acting as its cheerleader, but there are grounds for scepticism about the paper’s change of line.

For one thing, this isn’t the first time that the Star has promoted the EDL and then backed off. As I pointed out in an earlier post, in September 2009 the paper published an article under the headline “Case for the defence“, which gave credence to the EDL’s claim that they “oppose Nazis and racists”, and the next day published a follow-up piece which uncritically repeated the EDL’s assertion that they had been “swamped with messages of support from all races” as a result of the Star‘s original report. The Star then retreated from this position in the face of criticism, only to return to its promotion of the EDL last week.

Secondly, there is no sign that Star is going to change its obsessive and invariably inaccurate scaremongering against the same “innocent God-fearing Muslims” who it now claims to be defending from the EDL. Yesterday’s attack on Zakir Naik is repeated in today’s paper, which also continues the Star‘s familiar practice of publicising the rantings of Anjem Choudary with the evident aim of misleading its readers into believing that this irrelevant idiot with his few dozen followers represents a significant force within British Islam.

Even if the Star refrains from giving the EDL its official seal of approval and takes to describing them as “far-right extremists”, the fact remains that it is the misrepresentation of British Muslims by the Star and the rest of the right-wing popular press that provides the conditions in which far-right racist organisations like the EDL can thrive and grow.

How the Daily Star changed its line on the EDL

Critics say the English Defence League is a racist, extremist organisation that’s filled with hate. The group’s leader Tommy Robinson strongly denies this. He says members have no problems with race. But he admits he is against “barbaric” Islam and the way it affects Britain.

Whatever side of the fence you fall, one thing’s for sure. There is a visibly growing support for the EDL. It is attracting people across Britain to its ranks who feel the same way.

This should be a warning to the major political parties. Key voters are so fed up with them that they are looking elsewhere. And there are real underlying issues here with Brits who feel abandoned by their leaders.

The EDL are now planning to field election candidates. If the Tories, Labour and Lib Dems don’t heed this and address key issues they could soon become a political force. Then, whether you like them or not, Tommy and his followers will have to be taken very seriously.
Daily Star editorial, 13 February 2011

The English Defence League reckon they are on the march. They claim to be non-racist, non-violent and the voice of reason against the spread of Islamic fundamentalism in this country.

It’s time for a few facts.

Their membership is tiny. Police said last week’s demo, supposed to be the biggest event in the group’s history, attracted just 1,500 supporters.

The voice of reason, they say. Really? We’ve already revealed how one member was a people smuggler. They’ve defended another who is a convicted sex offender and drug user.

These are tough times and no one supports Britain’s working class more than us. And no one has been harder on Islamic extremists than this newspaper.

Don’t worry – we’ll continue to hold Britain’s main political parties to account to ensure they get us all a better deal. And we’ll keep a close and critical eye on their immigration policies too.

But blaming all our problems on innocent God-fearing Muslims is not the answer.

And we’ll never stop making that clear to the rag-tag bunch of thugs called the EDL too.