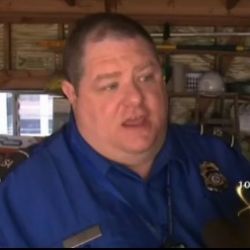 Roy Egan, an O’Hare Airport baggage handler who allegedly spewed racist and bigoted rants against Muslims, African Americans, Latinos and homosexuals on his Facebook page has been fired, according to the Chicago Council on American-Islamic Relations. CAIR said Egan had worked at the airport for nine years, was suspended in October and terminated this month.

Egan used his Facebook page, where he openly identified himself as a TSA officer, to post comments such as: “FILTHY MUSLIM,” Muslims “need to be exterminated”, “BURN ISLAM”, “Islam, a cult that glorifies death,” and “Does anything at all make you smile more than a Muslim burning by his own hateful hand.” He also posted remarks about President Barack Obama, First Lady Michelle Obama, and Attorney General Eric Holder.

CAIR-Chicago representatives met with Transportation Security Administration leadership in Chicago three weeks ago to voice the concerns of the Muslim community about the incident and to ask that more be done to prevent future incidents from happening.

“We made it clear that Egan’s discourse was as much an embarrassment to the agency and the values it stands for, as it was an affront against Muslims and other minorities,” Ahmed Rehab, CAIR-Chicago Executive Director, said. “By the end of the meeting, we felt convinced that the TSA leadership takes such violations of its code of conduct very seriously and that they genuinely set out to do their utmost to ensure that all constituents are treated with fairness and respect.”

“The TSA works hard everyday to keep Americans safe,” Amina Sharif, TSA communications coordinator said in the release. “When such egregious behavior is flagged on the part of one of their agents, it breeds confidence in us as passengers that it is dealt with as swiftly and as seriously as it was in the case of Roy Egan.”

Egan was in violation of the TSA code of conduct which stipulates that its employees – on or off duty – behave in a manner that avoids causing the public to raise questions about their judgment and ability to enforce the mission of the agency, the release said.