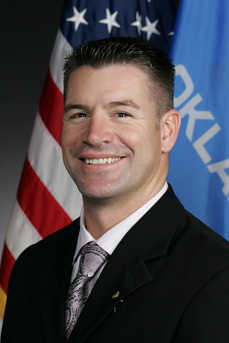 The leader of the Oklahoma chapter of the Council on American-Islamic Relations on Wednesday called on Republican leaders to repudiate remarks made by Rep. John Bennett on his private Facebook account.

Adam Soltani, CAIR Oklahoma executive director, is also asking the Republican from Sallisaw to apologize for the remarks.

A Monday Facebook post from Bennett reads: “The Quran clearly states that non Muslims should be killed. Arab is the ethnicity, not Muslim or Islam. Be wary of the individuals who claim to be ‘Muslim American.’ Be especially wary if you are Christian.”

Soltani said Bennett has taken the phrase out of context. “This is something revealed in the context of them being at war,” Soltani said. “This is when you meet in battle. It doesn’t say just go out and kill people.”

He said elected leaders should not be seeking to instill fear of Islam or Muslims. “Anti-Muslim bigotry and statements that promote misunderstanding and incite hatred toward a minority group have no place in the Oklahoma Republican Party,” Soltani wrote in a letter to Bennett. “Individuals elected to represent the people of Oklahoma should be held accountable for such extremist, inaccurate and intolerant views.”

Bennett, 40, said he has no intention of apologizing, adding that he was referring to Muslims who hold extreme views.

Bennett, who served in the U.S. Marines for 21 years, said he was trying to inform and educate Americans as to what is really going on. He said he has been in the Middle East a few times and is aware of the atrocities inflicted by extremists in the name of religion. “I am not against all Arabs or people who follow the religion of Islam,” Bennett said. “The religion has been changed. It used to be peaceful.”

The Oklahoma Republican Party did not immediately respond to a request seeking comment.

Later in the day, Bennett issued a press release saying the terrorist activities of the Islamic State of Iraq and Syria could soon reach the United States. He was critical of how President Obama has handled the situation, saying Obama has ignored confirmed Islamic terrorist movements. 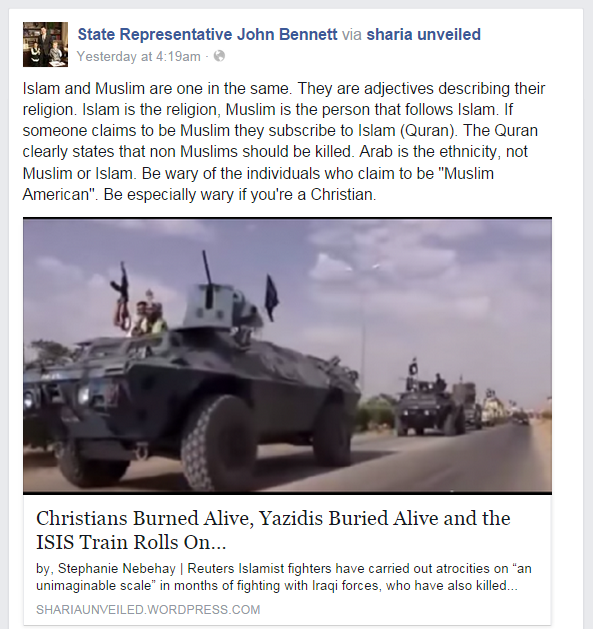 Oklahoma Republican Party chairman Dave Weston is quoted as supporting Bennett’s remarks: “If we as Americans were ruled by Islam, then Christians and Jews like you and I could only keep practicing our faith if we paid a protection tax. But if you’re Christian or Jewish and don’t immediately convert to Islam, they imminently decapitate you. This is proven by ongoing observation around the world today.”

As for Bennett himself, he has posted an “up yours” to CAIR on his Facebook page. The article to which he links states, with regard to the Muslim community: “The so-called moderates and the extremists are one and the same. There aren’t millions of truly moderate Muslims, because those that are make up a small minority and are irrelevant and terrified of the vast majority who share these extreme beliefs.” 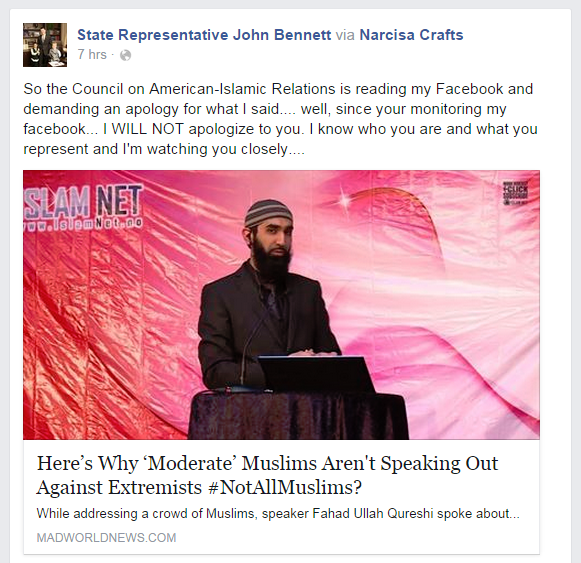