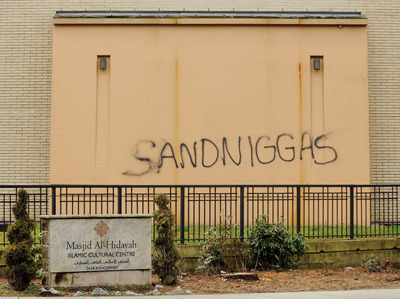 Neighbours of the Masjid Al-Hidayah and Islamic Cultural Centre are reeling after racist graffiti was scrawled across the front of the Port Coquitlam mosque Wednesday night. The word “sandniggas” was spray-painted onto the front of the building and was visible to drivers and local businesses along the Kingsway Avenue industrial strip.

Bill Thomson, a worker at Boyd Autobody and Glass across the street from the mosque, said it is the first time he has seen any vandalism on the neighbouring property since it opened six years ago. “We were going to go over and wash it off,” he said. “It’s absolutely disgusting.” Thomson said the employees at the auto body decided against cleaning up the mess, believing it could create issues with the mosques insurance company.