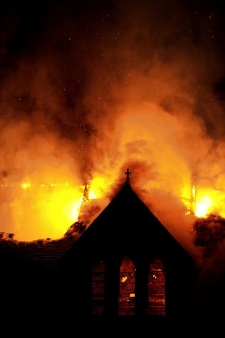 Fire investigators are “99 per cent sure” that a blaze which ripped through a church in Ipswich was started deliberately.

The fire at St Michael’s Church in Upper Orwell Street has left the Victorian building structurally unsafe. An inspection of the remains of the vacant church by experts has revealed the roof is too unstable for fire investigators to enter the building.

Today the owner of the dilapidated Victorian church said the community’s “dream is over”, after 25 years of savings and fundraising “went up in flames”, revealing his has no insurance. Muhammad Manwar Ali, chief executive of Jimas, the organisation that owns the building, was at the forefront of plans to transform the church into a £1million Muslim-run community centre.

Dismayed, Mr Ali returned to the scene this morning as fire investigators and a building inspector assessed the extent of the damage. The roof is completely destroyed and parts of the church were still burning, according to firefighters.

Mr Manwar Ali is set to lose the £350,000 he paid for the church last year out of his own life savings, fundraising and loans from friends. And plans to spend up to £1 million over the next few years on transforming the run-down site have been shelved as the building teeters on the brink of collapse.

But incredibly, Mr Manwar Ali said that even if the police did manage to track down those responsible, he would rather invite them round for a cup of coffee than see them go to prison. He said: “The foolish things is we hadn’t insured it. Hopefully there is nobody who has been harmed or hurt – there could have been somebody inside. I will forgive them (those responsible) and let them know I don’t want to see them in prison. They can come and have free coffee in our shop.”

He stressed that the church would have become a community centre, not a mosque, and that it would have been open to everyone in Ipswich. He said: “We were not doing it for business or to make money for ourselves, even if people find that hard to believe. It wasn’t a Muslim or Asian thing – it would have been a fantastic place for Ipswich.”