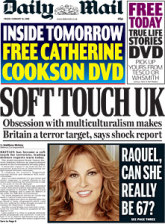 Britain has become a “soft touch” for home grown terrorists because ministers have failed to tackle immigrant communities that refuse to integrate, warns a report released today.

The Royal United Services Institute (RUSI), a body of the country’s leading military and diplomatic figures, says the loss of British values and national identity caused by “flabby and bogus” Government thinking has made the country vulnerable to attack from Islamic extremists.

“The UK presents itself as a target, as a fragmenting, post-Christian society,” the report says, and is “increasingly divided” on its history, national aims, values and political identity. “That fragmentation is worsened by the firm self-image of those elements within it who refuse to integrate.”

The report places most of the blame for this on a “lack of leadership from the majority, which, in misplaced deference to ‘multiculturalism’, failed to lay down the line to immigrant communities, thus undercutting those within them trying to fight extremism. The country’s lack of self-confidence is in stark contrast to the implacability of its Islamist terrorist enemy, within and without. We look like a soft touch. We are indeed a soft touch, from within and without.”