A university has reversed a decision to grant an honorary degree to an advocate for Muslim women who has made comments critical of Islam. Brandeis University said in a statement that Somali-born Ayaan Hirsi Ali would no longer receive the honorary degree, which it had planned to award her at the May 18 commencement.

Ali, a member of the Dutch parliament from 2003 to 2006, has been quoted as making comments critical of Islam. That includes a 2007 interview with Reason magazine in which she said of the religion: “Once it’s defeated, it can mutate into something peaceful. It’s very difficult to even talk about peace now. They’re not interested in peace. I think that we are at war with Islam. And there’s no middle ground in wars.”

Brandeis, outside Boston in Waltham, Massachusetts, said it was not aware of Ali’s statements earlier.

“She is a compelling public figure and advocate for women’s rights, and we respect and appreciate her work to protect and defend the rights of women and girls throughout the world,” said the university’s statement. “That said, we cannot overlook certain of her past statements that are inconsistent with Brandeis University’s core values.”

Even though the university withdrawing the honorary degree, “Ali is welcome to join us on campus in the future to engage in a dialogue about these important issues,” the statement said.

Ali was raised in a strict Muslim family, but after surviving a civil war, genital mutilation, beatings and an arranged marriage, she renounced the faith in her 30s. She declined to comment this week to the Associated Press.

In 2007, Ali helped establish the AHA Foundation, which works to protect and defend the rights of women in the West from oppression justified by religion and culture, according to its website. The foundation also strives to protect basic rights and freedoms of women and girls. This includes control of their own bodies, access to an education and the ability to work outside the home and control their own income, the website says.

More than 85 of about 350 faculty members at Brandeis signed a letter asking for Ali to be booted off the list of honorary degree recipients. And an online petition created Monday by students at the school of 5,800 had gathered thousands of signatures from inside and outside the university as of Tuesday afternoon. “This is a real slap in the face to Muslim students,” senior Sarah Fahmy, a member of the Muslim Student Association who created the petition, said of the honor before the university withdrew it.

But Ibrahim Hooper, a spokesman for the Council on American-Islamic Relations, the nation’s largest Muslim advocacy group, said, “It is unconscionable that such a prestigious university would honor someone with such openly hateful views.” The organization sent a letter to Lawrence on Tuesday requesting that it drop its plans to honor Ali.

Torygraph columnist Toby Young is outraged: “This is an act of extraordinary cowardice on Brandeis’s part. To accuse Hirsi Ali of “hate speech”, which is defined as ‘any speech, gesture or conduct, writing, or display which… may incite violence or prejudicial action against… a protected individual or group’, is almost comically ironic…. You would think that an American university would be a staunch defender of Hirsi Ali’s right to free speech and wouldn’t capitulate to a mob of politically correct Muslims at the first sign of trouble.”

This is the woman who told Reason magazine in 2007: “I think that we are at war with Islam. And there’s no middle ground in wars. Islam can be defeated in many ways. For starters, you stop the spread of the ideology itself; at present, there are native Westerners converting to Islam, and they’re the most fanatical sometimes. There is infiltration of Islam in the schools and universities of the West. You stop that.”

So, although Hirsi Ali’s supporters wax indignant at Brandeis’s supposed suppression of her right to free speech, it turns out that she is an enthusiastic advocate of suppressing free speech for Muslims at educational institutions. 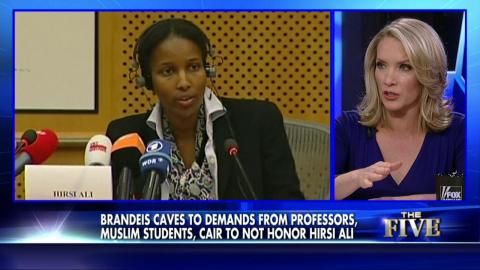