Filmmaker Eric Allen Bell is little known in the UK (not least because he hasn’t had much success with the few films he’s made) but he has become something of a celebrity among right-wing Islamophobes in the US.

It was Bell who directed a 2011 documentary titled Not Welcome which (at least in its original version) chronicled the backlash against the construction of an Islamic centre in Murfreesboro Tennessee, from a standpoint sympathetic to the Muslim victims of that campaign. More recently, however, the clearly unstable Bell has become a convert to the views of notorious anti-Islam propagandist Frank Gaffney, whose hysterical warnings about the “enemy-threat doctrine” of Sharia figured prominently in a court case launched by opponents of the Mufreesboro centre.

Bell’s increasingly demented Facebook page now features posts like this (note the use of block caps – the internet equivalent of green ink): 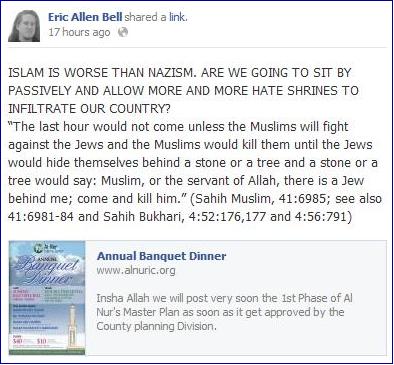 If you thought that was bad enough, Loonwatch draws our attention to a more recent Facebook post (from 15 August) in which Bell urges his readers to consider the merits of a nuclear attack on Mecca: 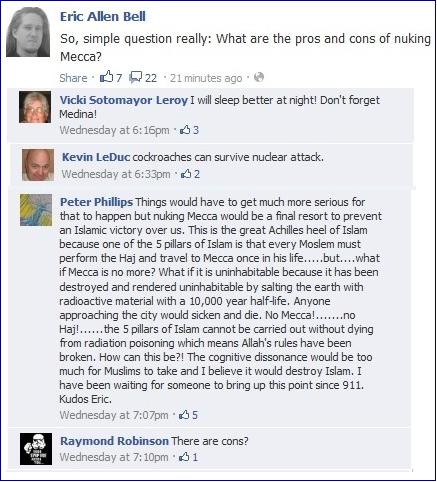 This was followed by further comments such as these: 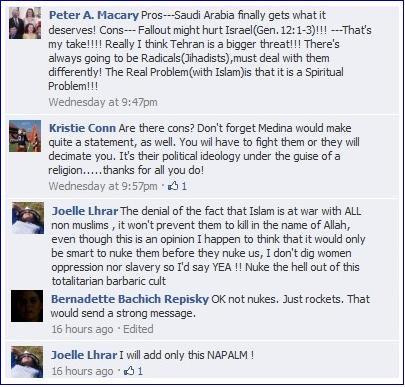 As Loonwatch notes, Bell allowed this stuff to pass while at the same time deleting comments that were critical of his proposal.

Some might imagine that even the likes of David Horowitz would draw the line at supporting a clearly disturbed individual who promotes this sort of sick lunacy. But they’d be wrong.

Only yesterday Horowitz’s FrontPage Magazine happily posted a new piece by Bell, “The threat of Sharia and the leadership of America’s two parties”, a Gaffney-inspired rant about a conspiracy by the Muslim Brotherhood (who else?) to impose Sharia law on the United States.