Tory blogger Graeme Archer, who was recently awarded the Orwell Blog Prize, has written an unpleasant article for the Daily Telegraph (“The East End villains who thrive behind a veil of multiculturalism”) in which he asserts that the “increasing Islamisation” of London’s East End has led to threats and violence against gay men, women and non-Muslims.

You might have thought the potential for right-wing scaremongering over this particular urban myth had been pretty well exhausted by now, but Archer manages to extract some further poison from the issue, even though we’ve heard most of this before from the likes of Andrew Gilligan or the Daily Mail.

The only new element Archer introduces into the familiar tale of the supposed threat posed by “untackled radical Islam” in Tower Hamlets is the sentencing last week of “five Muslim men, who admitted ‘grievous bodily harm with intent’: that is, they attacked and maimed Gary Smith, a religious education teacher from an East End school. They were recorded on the way, saying: ‘This is the dog we want to hit, to strike, to kill.” Mr Smith, in their opinion, had been insufficiently pro-Islam’.”

Archer asks sarcastically: “But what’s the scarred face of one schoolteacher when set against the need to keep the peace?” The implication here is that, presumably due to a commitment to multiculturalism or political correctness, there was a reluctance to act decisively against the perpetrators of the assault.

In reality, far from remaining “untackled”, the extremism of the four men responsible for the attack was taken so seriously that they were already under surveillance by the security services before the crime had been committed. As a result their car had been bugged, which was how evidence of their role in the disgraceful attack on Gary Smith came to light.

Having been convicted, the four men were sentenced accordingly. The BBC reported: “Azad Hussain, 26, of Wapping, and Akmol Hussein, 26, of Bethnal Green, both east London, were each given indeterminate sentences and ordered to serve a minimum of five years in prison. Simon Alam, 19, of Whitechapel, was given 10 years and told he would have to serve at least five years, and Sheikh Rashid, 27, of Shadwell, was sentenced to eight years and ordered to serve at least half the term.”

Nor did the local Muslim community ignore the case. The East London Mosque issued a statement condemning the assault, which quoted the mosque’s director Dilwar Khan as saying: “This horrendous attack on teacher Gary Smith by young thugs was all the more shocking because they made religion an excuse. Their abhorrent actions are entirely contrary to the teachings of Islam. We extend our best wishes to Mr Smith for a full recovery. The perpetrators should reflect on the shame they have brought to themselves, their families and their communities.”

In short, there is no evidence that the seriousness of the assault was downplayed because of some misplaced concern about “the need to keep the peace”.

The centrepiece of Archer’s article, however, is his claim that radical Islam “makes the East End an increasingly hostile environment for gay people”. This is just a recycling of the discredited thesis in Johann Hari’s “Muslim homophobia” article from earlier this year, in response to which Patrick Lilley examined the Metropolitan Police figures for homophobic crime during 2009-10 and found no basis for the claim that there had been a disproportionate rise in homophobia in East London.

The latest crime figures also undermine the caricature of the East End as the centre of homophobic hatred in London. As the Pink Paper reported last week: “Homophobic attacks in London’s Soho and the gay-friendly borough of Westminster increased last year, according to the Met Police. New figures released by Scotland Yard revealed that anti-gay hate crime increased by 26 per cent, from 117 to 148 incidents, from April 2010 to April 2011…. Likewise, Islington saw a significant jump with incidents rising from 82 to 131, a surge of 60 per cent.”

According to the Met, homophobic crimes in Tower Hamlets did show an increase during 2010-11, from 67 to 81 – but this was significantly less than in Islington or Westminster. In neighbouring Newham, which also has a sizeable Muslim population, the figures showed a much smaller rise, from 30 to 32. And in Hackney, where Archer himself lives, the number fell from 50 to 47.

As the result of an FOI request by Andy Godfrey, detailed statistics for violent homophobic crime in London between 2006 and 2009 are also available. Of the 66 individuals proceeded against in Tower Hamlets during that period 24 were of Bangladeshi origin. I make that 36.3% of the total. The last census found that the Bangladeshi population of the borough was 33.4%.

So there is still no evidence that gay men in London are most likely to be the victims of homophobic crime in the East End, nor that there has been a greater increase in such crimes in Tower Hamlets than in other areas of the capital, nor that the perpetrators are disproportionately from the ethnic group to which most Muslims in the borough belong, still less that homophobia in Tower Hamlets is tied to some mythical “increasing Islamisation of the borough”, as Archer claims.

In an attempt to substantiate the latter accusation Archer refers to the notorious “gay free zone” stickers that appeared in the East End some months back. He fails to mention that the Mayor of Tower Hamlets and the East London Mosque – both of whom usually figure prominently in Gilligan-style fantasies about the Islamification of Tower Hamlets – issued statements along with Rainbow Hamlets LGBT Community Forum and Tower Hamlets Inter Faith Forum condemning the stickers and denouncing homophobia.

Archer sneers at the suggestion made at the time that the stickers might have been the work of far-rightists like the English Defence League aiming to stoke tensions between Muslims and non-Muslims. This theory would now appear to be mistaken, as a youth named Mohammed Hasnath has recently been charged after allegedly being caught on CCTV posting up the stickers. But the reason for the initial speculation about EDL involvement was that the individuals responsible for the homophobic stickers were so marginal to the East End’s Muslim community that nobody had a clue who they were.

In reaction to the appearance of the stickers there was an attempt to hold a protest march in Tower Hamlets under the heading of East End Gay Pride. Archer complains, bizarrely, that “when a small counter-demonstration was proposed, its organisers were smeared as a front for – you guessed it – the EDL”. But the fact is that the leading organiser of the planned march, one Raymond Berry, resigned after the LGBT Muslim group Imaan revealed he had been a founding member of the EDL – a charge that Berry did not dispute. Imaan also said it was about to publish evidence to show that other individuals involved in East End Gay Pride had “right wing and fascistic associations”, in response to which the organisers called off the march. Nobody was “smeared” and Archer is evidently intent on rewriting history here.

He goes on to criticise politicians who draw a parallel between “Islamic extremists” and the EDL. It is clear that Archer regards the former as the real threat and notably fails to offer even the mildest criticism of the EDL. And bear in mind that this is against a background of what has been accurately described as an “escalating campaign of intimidation and violence” by the EDL.

For example, on 19 May a mob of EDL thugs attacked an anti-racist meeting in Barking that had been organised to defend multiculturalism. Last week a youth was sentenced after being convicted of assaulting a Muslim police officer when EDL hooligans invaded and disrupted a meeting in Lincoln where local Muslims were discussing plans for a new mosque. Last weekend the EDL organised a protest against a proposed mosque and community centre in North Wales, while openly celebrating the fact that the building in which the centre would have been based had been burned to the ground following an earlier EDL demonstration.

For Archer, drawing a parallel between “Islamic extremism” and the EDL is wrong because the latter is just a reaction to the fundamental problem of “untackled radical Islam”. He doesn’t go so far as to characterise the EDL as a legitimate response to this supposed problem but rather leaves the question open. Earlier this year another right-wing Islamophobe, Douglas Murray, gave a speech in which he applauded the EDL for taking to the streets with placards denouncing sharia law as anti-gay and invited his audience to welcome this gang of racist hooligans as “a grassroots response from non-Muslims to Islamism”. On the evidence of his Telegraph article you do wonder whether Graeme Archer is going down the same road.

Update:  A link to Archer’s article has been posted on the EDL’s Facebook page:

And here are some of the comments from EDL supporters in response to the article: 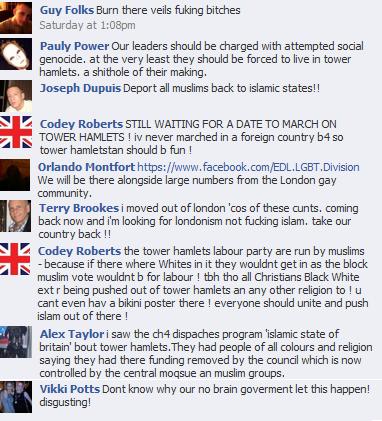