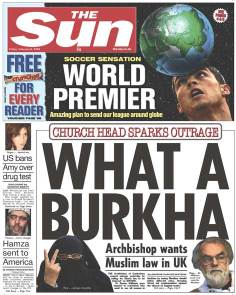 The Archbishop of Canterbury sparked outrage today by saying the introduction of Sharia law in Britain is inevitable. In an explosive outburst Dr Rowan Williams, the country’s top Anglican, said there should be one set of rules for Muslims – and another for everyone else.

He maintained it was WRONG for followers of Islam to be forced to choose between “the stark alternatives of cultural loyalty or state loyalty”. Instead he said the country must “face the fact” that some Muslims do not relate to the law in Britain.

The 57-year-old insisted we accept aspects of Sharia law with a “constructive accommodation” in areas like marriage so Muslim women would not have to use British divorce courts. He added: “It seems unavoidable.”

Dr Williams’ extraordinary claim is a huge propaganda coup for extremists plotting to end centuries of the British way of life. And it was roundly condemned from all quarters last night.

Paul Dadge, famously pictured helping masked 7/7 victim Davina Turrell, 24, was left stunned. The 31-year-old former fireman, of Cannock, Staffs, said: “The Archbishop’s remarks are unhelpful. I am proud to be British and find the idea that Sharia law would ever become part of British law incredible.”

Mary Burke, 50 – who survived the King’s Cross bomb on July 7 2005 – said: “Britain is a Christian country and should stay a Christian country. I don’t want Islamic law here and I believe most of the British public agree with me.”

And the Sun’s leader opines: “It’s easy to dismiss Archbishop of Canterbury Rowan Williams as a silly old goat. In fact he’s a dangerous threat to our nation. He says the adoption in Britain of parts of Islamic Sharia law is ‘unavoidable’. If he believes that, he is unfit for his job….He also gives heart to Muslim terrorists plotting our destruction. They will see his foolish ramblings as a sign that our resolve against extremism is weakening.”