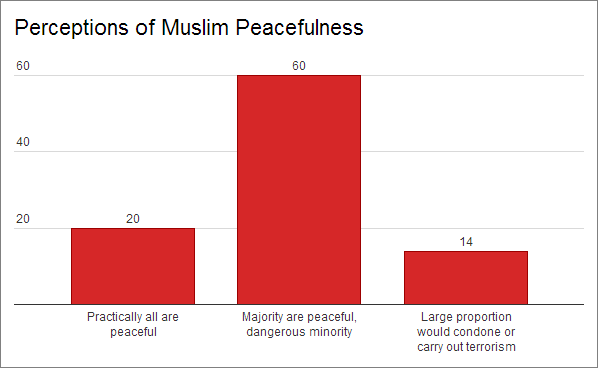 Following the attack on soldier Drummer Lee Rigby outside the Royal Artillery Barracks in Woolwich on Wednesday, new YouGov research finds the British public resolute in their perceptions of the terrorist threat level and in their attitudes towards the Muslim community.

The Deputy Prime Minister Nick Clegg has warned that what terrorists want “is to sow that corrosive seed of fear and division”. In this case they have failed: eight in ten (78%) report the chances of themselves, a family member or a good friend being killed in a terrorist attack as being “fairly low”, “very low” or “almost non-existent”. Just 10% say the risks to themselves or friends and family are “fairly” or “very” high. The figures are relatively unchanged since before the attack.

Despite some of the first reactions to Wednesday’s attack – particularly by the English Defence League – showing signs of division, the country appears united. Eighty percent say that most Muslims are “peaceful and law abiding citizens”, and while three quarters of these believe “there is a dangerous minority who feel no sense of loyalty”, the remaining quarter say practically all of them “deplore Wednesday’s killing as much as everyone”.

The proportion believing that “a large proportion of British Muslims feel no sense of loyalty to this country and are prepared to condone or even carry out acts of terrorism” is low in all party groups except UKIP voters where a significant minority (36%) tend to agree.

Since the attack a number of MPs have called for Theresa May’s Draft Communications Data Bill, which would permit the government to store information on user’s internet and telephone activity, to be revived after Nick Clegg prevented it being included in the Queen’s Speech.

The public are more opposed than supportive of the idea. While 31% say “the Communications Data Bill would give the government more powers to fight terrorism and the terror threat shows it should be continued with after all”, 44% say the bill “would not have done much to fight terrorism, but would have given the government unnecessary powers to snoop on emails and phone calls – it was right to drop it.”

The full results of the poll, which was carried out for the Sunday Times, can be found here.