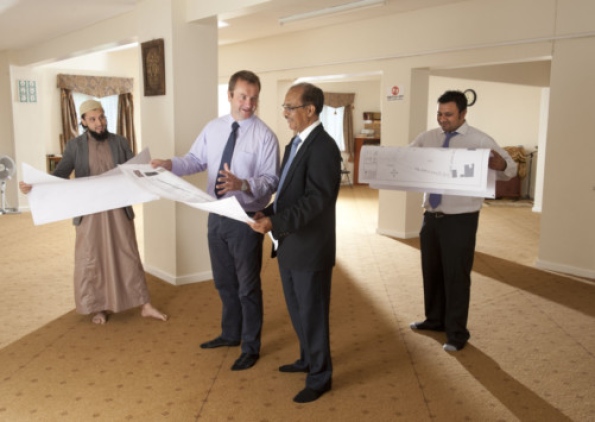 A purpose-built mosque will promote religious integration and help to create jobs in Yorkshire by becoming a major community facility, according to a leading supporter of the project.

Shazad Hussain, who is overseeing the scheme to create a new mosque in York, said he hoped local material and labourers would be involved in the building work, at a time when many construction firms were struggling due to the slump caused by the global financial crisis.

The proposal for a £1.5m mosque has been backed by City of York Council, and the local Muslim community is raising funds to pay for the building costs. The mosque is due to be built in Bull Lane, York, after previous concerns over flooding at the site were addressed.

The project will see the existing mosque, which has been on the site for 27 years, replaced with a new building. The current facilities are struggling to cope with the growing numbers of people who are using them.

According to Mr Hussain, who is in charge of the York Mosque scheme, the current mosque, a flat-roofed, brick-built former local authority depot, is too cramped and has high maintenance costs. It’s hoped that building work could begin on the site within two years.

The property will be the first purpose-built mosque in York. Those attending the York Mosque include up to 300 Muslim families living locally, and overseas students at York University.

The current York Mosque, which is affiliated to the UK Islamic Mission (UK IM) can accommodate 300 worshippers, while the new building will hold 480 people. An extra 56 people could be accommodated in an exhibition room in the new mosque which will feature Islamic literature, artefacts and a history of the site.

Mr Hussain said the current mosque was no longer fit for purpose, because of its age, size and condition.

“Our wish is that the new mosque will become a religious resource for schools and interfaith groups to learn about Islam,” he said.

“We want the replacement mosque to promote integration and harmony and to have real benefits for the wider community in a city which is an important religious centre. Some rooms may be available to hire to local community groups.

“Our wish is to create an important new place of worship and a valuable facility which York people will be proud of. We want the wider community to use the mosque, in order to create a better understanding between the community and the mosque.”

Mr Hussain hoped a wide variety of groups would choose to use the mosque regularly, although no alcohol would be allowed inside. He said it might be necessary to build the mosque in phases, but he hoped the scheme would be completed within two years.

As we have previously noted, the proposal for a new mosque resulted in an EDL-supported petition and a Facebook page, “Say ‘NO’ to the York mosque” which has attracted 1,427 likes. Indicative of the sort of opposition the plan provoked was the fact that the building design had to be revised after police objected that it lacked sufficient security measures to defend the mosque against attacks by the likes of the EDL.

So, in short, we have another welcome victory over the bigots. And they’re not happy. Only a few days ago the “Say ‘NO’ to the York mosque” Facebook page was updated with the addition of this (rather outdated) picture: 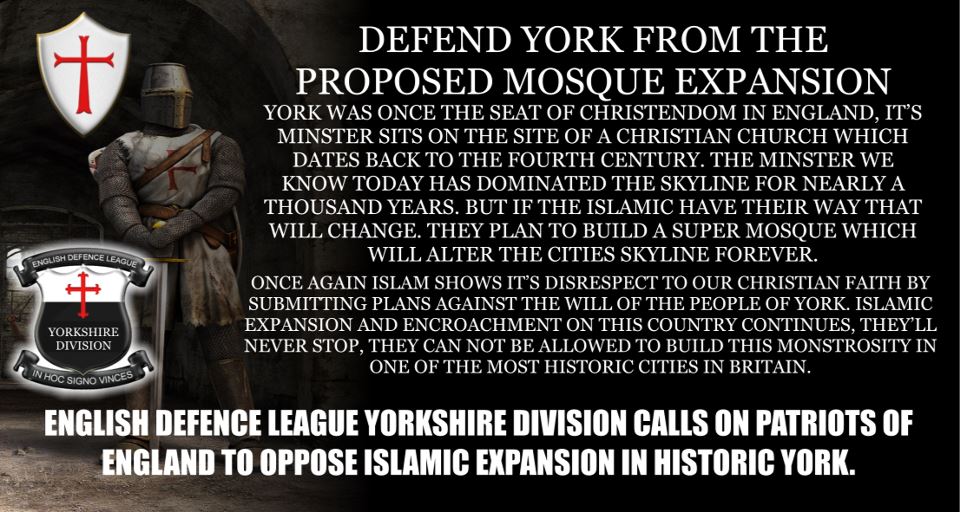 Not all the resulting comments have been favourable to the EDL’s view of the situation: 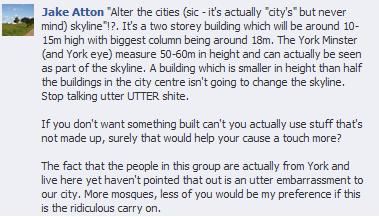