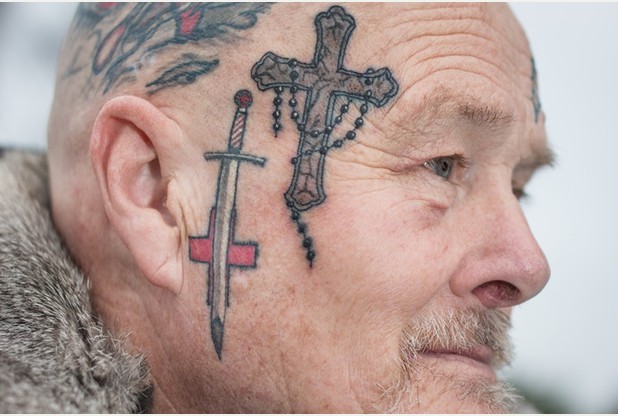 Angry about the Islamic State mass murders and beheadings he had seen in the news, a man took out his fury on an Islamic Community Centre at Carnon Downs, sending grossly offensive cards there which he had smeared with his dog’s faeces.

One of the pictures showed Allah having intercourse with a pig, and another, a naked woman sitting on an Islamic State flag, both containing offensive messages.

Alison May, for the CPS, said Mr Choudhury was the general secretary at the community centre in Carnon Downs where there was a designated Muslim prayer area. He received an envelope in the post containing two cards with pictures on them and offensive messages, and smelling of excrement.

One of the messages on Facebook claimed it was sacrilege for the centre to have replaced the former Christian church which was there with what he described as the evil of the Muslim religion, saying: “Get out of the country”.

When he was seen by the police, King said: “There will be a war soon”. He said he did not like anything to do with Islam and saw Facebook as a mechanism for him to have a voice. “They can preach against us, why not us against them?” He had a previous conviction for assaulting a police officer and for harassment.

His solicitor Paul Gallagher said King had always been a Christian and other religions did not bother him unless they crossed the line and preached hatred against Christianity, and that was what he felt Islam was doing. “He considered turning a house of God, the old chapel, into a Muslim centre, was sacrilege,” said Mr Gallagher. “He had begun to get angry about it and already suffered from anger issues for which he was now taking medication.

Mr Gallagher referred to Islamic mass murders and beheadings, which he said made King angry.

“He got so worked up about what was happening he decided to send the pictures to the Islam centre. He took the photographs from a Facebook picture and went to a local store and had them printed off, and then wiped them with dog excrement and sent them. He was particularly angry and upset at what he was seeing in newspapers and on the television.”

Mr Gallagher said what King did would not be repeated. He would continue with his own Facebook page to give himself a voice.

The magistrates adjourned the case to December 16 for a full probation report, giving King bail with conditions not to use any social networking site to pass any abusive, threatening or insulting messages, not to contact any person associated with the community centre and not to attend the centre.

A quick scan of Eric King’s Facebook page reveals the ideological inspiration for his actions. He is an admirer of almost every far-right group in the UK, from the British National Party to the English Defence League.

Following his appearance in court King openly declared his support for Ryan McGee, the EDL member recently jailed for manufacturing a nail bomb. He commented “RESPECT the wars coming and theres nothing wrong with being ready”, followed by “the only good muslims a dead one”. 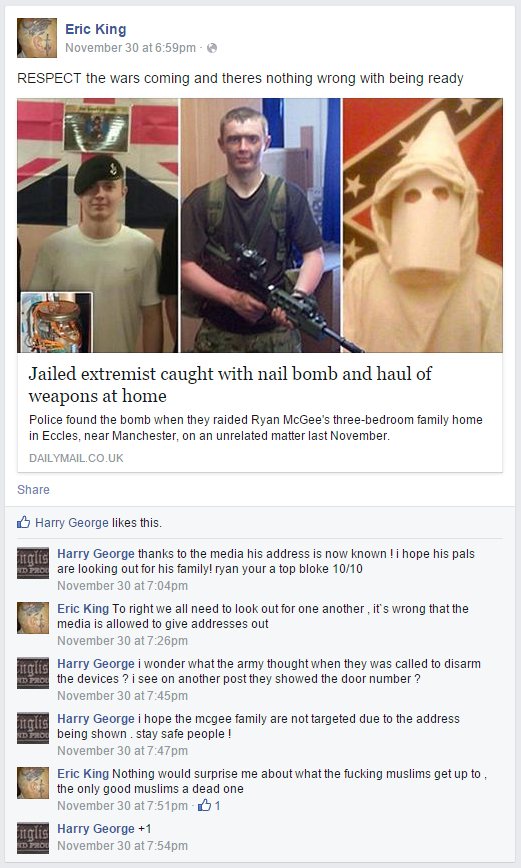 “Gail Hawkley, for the prosecution, said when King was arrested he told officers he was a member of the English Defence League and the British National Party.”