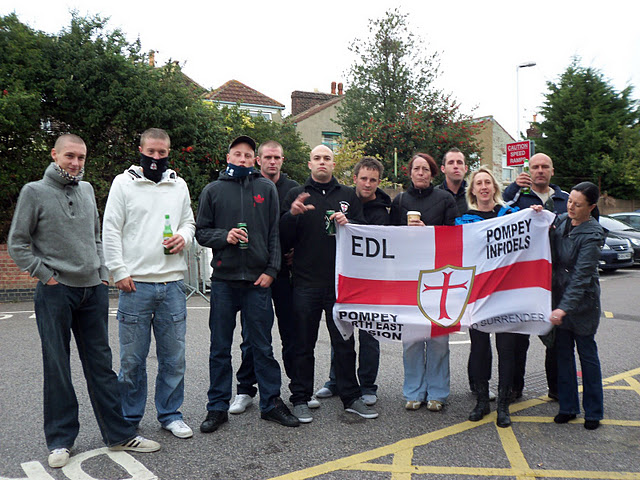 Two members of the far-right English Defence League have found themselves up in Portsmouth Courts in the same week for racially-aggravated harrassment and breach of bail conditions for violent assault.

Jacob Jake Hyland is one of the more active and extreme fascist members of Portsmouth EDL and the hilariously entitled “Pompey EDL Youth Division”. He has even been on the Portsmouth Anarchist blog under the name “pompeyagainstanarchists” arguing that the EDL are not racist.

The 18-year-old, of Mayridge, Fareham, been given a restraining order by Portsmouth Crown Court (15/11/11) for religiously-aggravated harassment after making abusive phone calls to Abbas Rahim at the Al Mahdi Centre in Fareham in October and November of last year.

Following the court appearance of baby-faced Nazi Jacob ‘Jake’ Hyland earlier in the week, a second Portsmouth member of the extremist EDL also had his day in court (or should that be YET another day in court, following his previous convictions?!).

Blaise Silvester, 21, of Stubbington Avenue, North End, was given a two-month curfew and told to do 100 hours of unpaid work after attacking peace protesters at a demonstration outside the Jami Mosque in Victoria Road North, Southsea. A group of football hooligans, neo-nazi extremists and local youths formed to hurl racist abuse, bottles, bricks, fireworks and roofing slates at members of the peaceful Portsmouth Muslim community and many others from the local area who had gathered to defend the mosque.

Sentencing him in June, Judge Graham White said the 21-year-old could normally have gone to jail. But a mistake by the probation service meant the judge’s hands were tied and he had to hand Silvester a community order. Silvester was given a 12-month community order and told to do 100 hours of unpaid work in the community. He also had to wear an electronic tag and stay at home everyday from 9pm to 6am for two months. Silvester should have been offered rehabilitation by the probation service for a previous offence but because he wasn’t, the judge said he couldn’t jail him.

Rather than counting himself lucky and getting on with the unpaid work, Silvester breached the order. On one occasion he shouted and swore at the officer in charge and another time he failed to turn up, Portsmouth Crown Court heard.