“It seems that not a week goes by without a new mosque desecration”, the Collectif Contre l’Islamophobie en France observes.

Yesterday a mosque in the Glonnières district of Le Mans was found covered with graffiti reading “Islam out of Europe”, “No Islam” and “France for the French”.

On Saturday a mosque in Miramas was also daubed with Islamophobic slogans along with the name of Front National presidential candidate Marine Le Pen. It was the second time in four months that the mosque had experienced such an attack.

Last month we reported that fascist graffiti were painted on the wall of a mosque that is under construction in Montigny-en-Ostrevent, and two pig’s heads were left at the site where another mosque is being built in Nanterre. 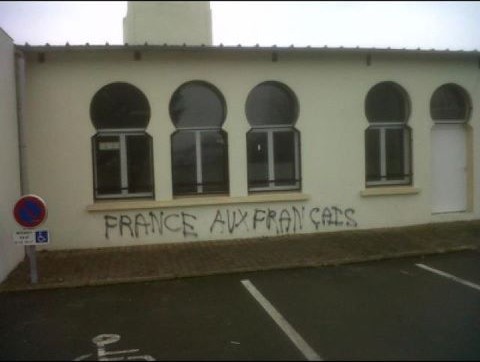