Imagine your average British Muslim family sitting around the breakfast table with the papers this morning. On the front page of the Sun, an image of a woman in a hijab fashioned out of the Union Jack and the headline “United Against IS” hollers out at them. In the right-hand corner, a subheadline urges them to “stand up to extremists”.

Yes, you there, Muslim – bleary eyed, sipping your coffee, who thought the activities of a militant group thousands of miles away had nothing to do with you – are you standing up to extremism right now? Is your Islam “British”? If not, then you are Part of the Problem.

It doesn’t end there. Inside, there is a flag cutout with “United Against IS” on it. Please stick it on your window or somewhere else highly visible to make it clear where you stand. Now, time for cornflakes.

The implications of this stunt are clear. Even though the editors shoehorned in an appeal to “Brits of all faiths”, this can only be a figleaf as the image clearly screams “Muslims”.

What the Sun says is that Muslims have to prove their British credentials with a display of loyalty – that their Britishness is not taken for granted until they do so. You are a shady Muslim first, and a citizen second. It may be masquerading as a jolly exercise in solidarity of the “Keep calm and carry on” type. But the subtext is pretty clear: “We are united against IS, Are they?”

Nesrine Malik responds to the “anti-extremism” campaign in today’s Sun. 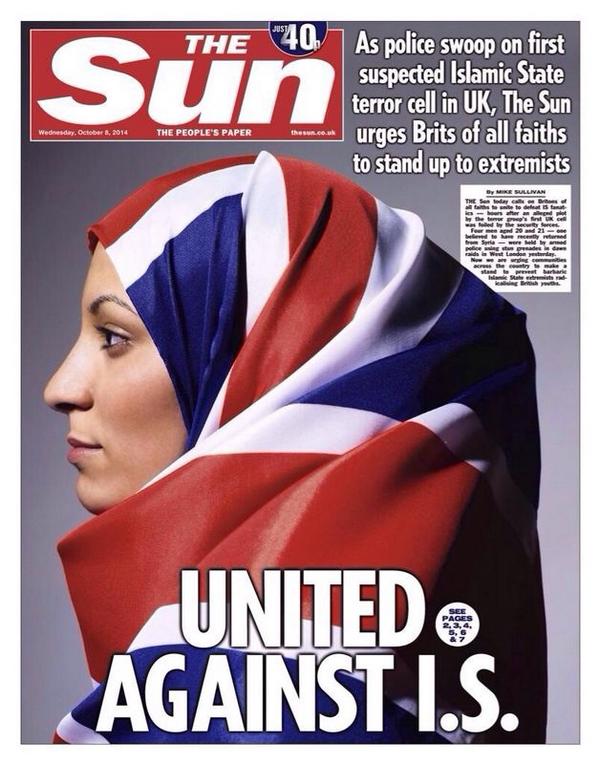