Here is an exchange that appeared on the English Defence League’s Facebook page yesterday. 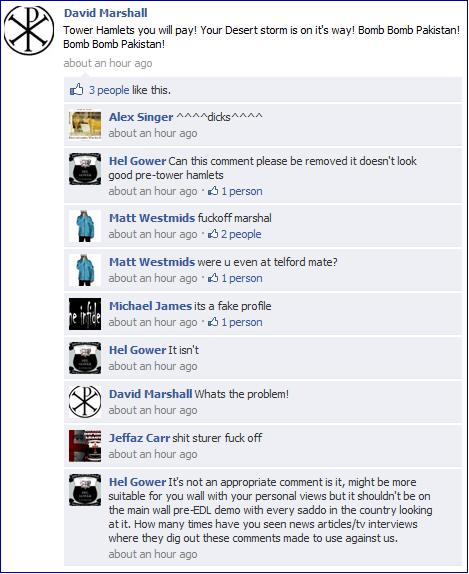 As demanded by Gower, who is head of the EDL’s admin team, David Marshall’s threatening comment was eventually removed. Note, however, that Gower has no objection in principle to EDL supporters promoting such views. She merely argues that “it doesn’t look good pre-tower hamlets” if EDL supporters post their threats on the EDL’s own Facebook page and tells Marshall that his comment would be “more suitable for you[r] wall with your personal views”.

Four years ago an Al-Muhajiroun supporter, Umran Javed, received a six-year prison sentence after being convicted of soliciting murder because he chanted “Bomb, bomb Denmark, bomb, bomb USA” at a protest against the Danish anti-Islam cartoons. The Crown Prosecution Service justified the decision to charge Javed on the grounds that “when we examined the content of Mr Javed’s speech it was explicit that there was direct encouragement to those present and those watching via the media to commit acts of murder against the Danish and Americans”.

Will the police and CPS try and track down David Marshall and ensure that he is charged with the same offence? Don’t hold your breath.

Last month another extremist, Bilal Ahmad, was jailed for 12 years after being convicted of soliciting murder over messages he posted on the Revolution Muslim website calling for attacks on British MPs who voted in favour of the Iraq war. The CPS stated that Ahmad had committed a “serious offence which strikes at the heart of our democratic society” and that the sentence sent “a warning to people who would seek to encourage violent extremism or to stir up hatred on the internet”.

A couple of days before Ahmad was sentenced, George Galloway complained to the police about an explicit appeal to “Kill George Galloway“, posted on the Facebook page of former prominent EDL member Daryl Hobson. Hobson was the source of press reports that the Norwegian terrorist Anders Breivik had been linked to the EDL and was one of the contacts to whom Breivik sent his manifesto. It will be interesting to see whether the CPS decides to charge Hobson with soliciting murder. Again, don’t get your hopes up.

The EDL regularly complains about a “two-tier legal system” in the UK, which supposedly discriminates in favour of Muslims and against the EDL’s supporters. It would appear that there is indeed a two-tier system in operation, though the double standards are the exact opposite of what the EDL claims. While the police and CPS enthusiastically pursue Muslim extremists who advocate violence, and applaud the imposition of heavy prison sentences, they show significantly less enthusiasm for prosecutions when the threats of violence come from the anti-Muslim extremists of the EDL.