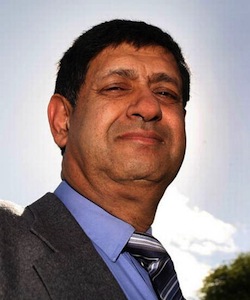 There’s always been a market for Muslims who are prepared to publicly endorse Islamophobic smears against their co-religionists, and Taj Hargey, the self-appointed imam from Oxford, has always been particularly eager to cater to that demand.

If you’re looking for a self-styled Muslim leader to back a Zionist-inspired Panorama attack on the Muslim Council of Britain, blame British mosques for the 7/7 bombings, accuse university Islamic societies of fuelling terrorism, support the claim that a mosque near the Sandhurst military academy represents a security threat, line up with Christian fundamentalists in denouncing a proposed “mega-mosque” in East London, applaud Sarkozy’s ban on the veil or excuse the Swiss ban on minarets – then Taj Hargey’s your man. (A summary of Hargey’s record on such issues can be found here.)

However, since his arrival in the UK following the collapse of a couple of dubious-looking business ventures in the US, Hargey’s attempt to transform himself into a media star for the Islamophobia industry has turned out to be less successful than he would have hoped. This is probably because Hargey comes across as a pompous, arrogant, ill-tempered and generally unpleasant human being whose off-putting manner on TV and radio tends to alienate his audience, undermining any sympathy they might have for the views he’s propagating.

The conviction last week of seven men of Pakistani heritage charged with sexual abuse of underage girls in his home town of Oxford offered Hargey an opportunity to relaunch his media career. It’s all very well to have Allison Pearson retailing racist myths about Muslim grooming and the supposed role of Islamic institutions in encouraging such practices, but how much better for the right-wing press to have a Muslim coming out with the same ignorant, Islamophobic drivel. Step forward Taj Hargey.

Hargey’s article in the Daily Mail last week (“The Oxford sex ring and the preachers who teach young Muslim men that white girls are cheap”) was immediately taken up by the Daily Telegraph (“‘Imams promote grooming rings’, Muslim leader claims”) and yesterday Hargey received a further plug in the Sunday Express (“Imam: ‘Sack liberal cowards’”). Nor is the promotion of Hargey and his poisonous opinions restricted to the Tory press.

Carole Malone’s column in yesterday’s Sunday Mirror (“Oxford grooming ring was race-hate gang rape”) featured a gushing tribute to Hargey’s role in whipping up Islamophobia in the wake of the Oxford trial (“while most Muslim clerics have stayed silent on this, while our wider society refuses to acknowledge what these crimes are REALLY about, only Dr Taj Hargey, imam of the Oxford Islamic congregation, had the courage to stick his head above the parapet and say what happened to these girls WAS racially motivated and illustrates the deep-seated hatred some Muslim men have for white women”).

Last week Hargey was also featured on the Jeremy Vine show on BBC Radio 2, where he was used to discredit the far more informed analysis of the Oxford grooming case presented by John Brown of the NSPCC’s sexual abuse programme. In response, Yusuf Smith has posted a well-argued piece over at Indigo Jo Blogs demolishing Hargey’s nonsense about the responsibility of the Muslim community in encouraging the sexual exploitation of young girls. But don’t expect Muslims putting forward such reasoned arguments to be afforded the same media profile as Hargey any time soon.