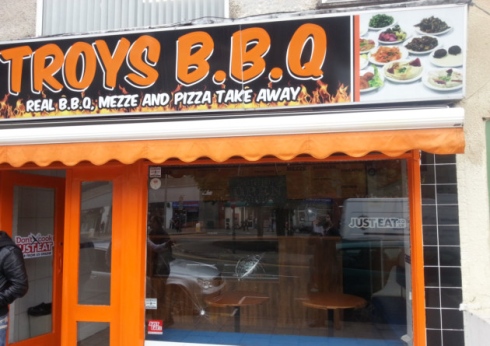 Smashed windows, arson attacks and anti-Muslim threats have left town centre businessmen claiming Weston has a “very big racist problem” and that they are being targeted because of their nationality.

Police are investigating a Turkish-run eatery’s claims that someone attempted to blow up its premises after a fire was started near a set of gas canisters, while one convenience store worker was told “I hate Muslims” after putting a Halal poster in a window – which was also smashed.

Police arrested a man on Tuesday after the latest attack on Troys BBQ in Alexandra Parade in the early hours of the morning.

They are also investigating an arson attack on the same takeaway, run by two Turkish brothers, which its owners say could have killed anyone inside had the fire ignited a set of nearby canisters.

But business owners claim these incidents are the tip of the iceberg, and they regularly face racially-motivated threats, intimidation and vandalism.

Ben Altay, owner of Regent Omelette Bar, said: “There is a real racist problem here and you can see and feel it all the time. I am from Germany – in Germany there is racism but it is not as extreme as here.”

Ebo Abdullah, who works in the Ezze Shop convenience store in the Alexandra Parade, said: “I don’t feel safe. I always have two friends with me here at night. It used to be nice in Weston, with lots of great people. But some people and teenagers are troublemakers. It is absolutely a racist problem. A big problem.

“Ten days ago the window was smashed after I put a Halal sign in the window. I covered it up and a man came in and said ‘Are you hiding? If you are hiding I’m going to smash another one.’ He came in a couple of days later and said ‘I hate Muslims, this is nothing, I can do more.’ I said to him ‘you are just racist’. I tried to keep him here but he ran away.”

Mr Abdullah added that he also received pro-Christianity leaflets through the shop’s letterbox.

The owner of Alexandra Parade convenience store Booze 4 U says his shop window has been smashed repeatedly. Vedat Adil, of Booze 4 U, said: “The window has been broken 10 times, easily.” He said that the attacks came when a sign was put in the window highlighting Polish deals. He added: “Within a couple of days there were cracks in the window. That’s racist abuse.”

And Omer Duran, Troys BBQ co-owner, said: “We are open until 3am and there are drunk people. We do 99 per cent ignore these people but sometimes we are only human, tempers do rise and we can be a little reactive. We are not radical religious people. We just work here.”

His brother Hasan Duran said: “There are racists everywhere, all over the world. We have to do something. There’s a very big racist problem in this town.” He said he considers himself English and that he wants to respect people in the UK and Weston. He added: “Most English people are very nice. I’m very lucky I am living in this country. These things don’t suit the English people.”

For its part, the Weston-super-Mare Division of the English Defence League indignantly rejects accusations of racism: 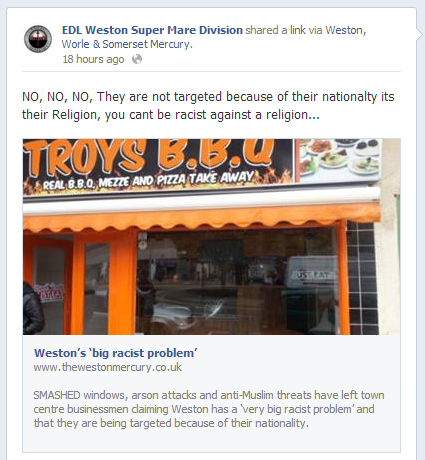 Four years ago a proposal to build a new Islamic centre in Weston provoked a racist backlash that was described as “frankly frightening”.

A Facebook page “No to the new Mosque in Weston-super-Mare” attracted comments such as “Muslims are never gonna take over this country….well at least weston super mare, I swear on my life if they built this new mosque in weston I will set fire 2 it and thats a f***in promis.”

Three men were subsequently cautioned by the police over racist letters they sent opposing the development.