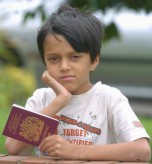 For seven-year-old Javaid Iqbal, the holiday to Florida was a dream trip to reward him for doing well at school. But he was left in tears after he was stopped repeatedly at airports on suspicion of being a terrorist.

The security alerts were triggered because Javaid shares his name with a Pakistani man deported from the US, prompting staff at three airports to question his family about his identity. The family even missed their flight home from the U.S. after officials cancelled their tickets in the confusion. And Javaid’s passport now contains a sticker saying he has undergone high-level security checks.

Salim Mulla, secretary of the Lancashire Council of Mosques, said: “It is ridiculous, I’m shocked. They really should have known he was only a seven-year-old child. I do understand the reasons but this was over the top. I can understand the safety aspect but it doesn’t help relationships with different faiths.”