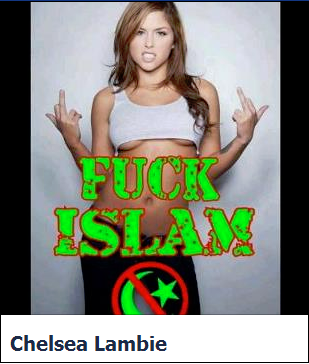 A teenage woman and a man have been found guilty of throwing bacon into Central Mosque and wrapping it round the door handles.

Chelsea Lambie, 18, from Paisley, and 38-year-old Douglas Cruikshank from Galashiels carried out the early morning attack in January last year.

Cruikshank originally denied the charge, but changed his plea after the Crown dropped its claim that the offence was racially aggravated.

A jury took just over an hour to return a majority verdict of guilty on Lambie. She was found guilty of behaving in a racially aggravated threatening or abusive manner likely to cause fear and alarm.

Sentence was deferred until May 23.

Given that Lambie expresses an interest in “blowing up mosques” on her VK profile, it’s just as well she was apprehended before she progressed to anti-Muslim actions of a more violent character. Hopefully a prison sentence will be imposed on 23 May.