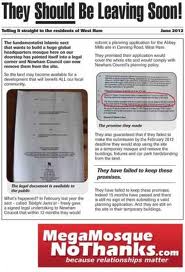 Islamic leaders hoping to push through plans to build a permanent ‘mega-mosque’ in West Ham have denied claims they could be thrown off the site.

Tablighi Jama’at already occupies an area of Canning Road and has proposed erecting a 9,500 capacity religious building with 40m high minarets, a library, and a visitors centre. But it has emerged that the group signed a deed of unilateral undertaking with Newham Council in February.

A document released last week appears to state that the group agreed to submit a valid planning application within 12 months or face removal from the site. But a spokesman insisted a basic application has been lodged with the council and was going through the “validation process”. “I’m surprised to hear this,” she said. “Our basic application was submitted by the end of the February. As you can imagine, it was an enormous application.”

The proposals have come under attack from campaigners who say Tablighi Jama’at is extreme and isolationist and risks turning West Ham into an “Islamic ghetto”. If built, the site will contain five public spaces, described as “character zones”. One will house the visitor centre and others a nature trail. The mosque will be equivalent to an eight-storey building, while apartments will range from four to seven storeys high.

It would not be the first time the religious group has battled with the council over its right to remain on the site. Planning officers served an enforcement notice in February 2010 in order to shut it down over concerns at traffic levels, land contamination, and visual impact. But Tablighi Jama’at was granted a two-year extension in May 2011 following a public inquiry.

A Newham Council spokesman confirmed the group had failed to submit a valid planning application by the February 28 deadline. He said: “We are aware of the situation and are currently considering next steps. At this time, to avoid prejudicing any future action, we cannot comment further.”